A recent survey by Course Hero found that a number of hot-button issues are influencing the voting decisions of college students – including inflation, student debt forgiveness, the cost of college, and Roe v. Wade. This is also the first time the majority of Gen Z is eligible to vote, but overall trust in the election process is low among college students.

Keep reading to learn more about the issues driving college students to the polls on November 8.

This midterm election marks the first time the majority of Gen Z – which represents 20% of the US population – will be eligible to vote. According to recent estimates, more than 8 million young people have become eligible to vote since the 2020 presidential election. Nearly 80% of college students surveyed claimed to have voted in 2020 while 88% of Gen X, 76% of millennials, and 65% of Gen Z respondents said they plan to vote in the midterms. 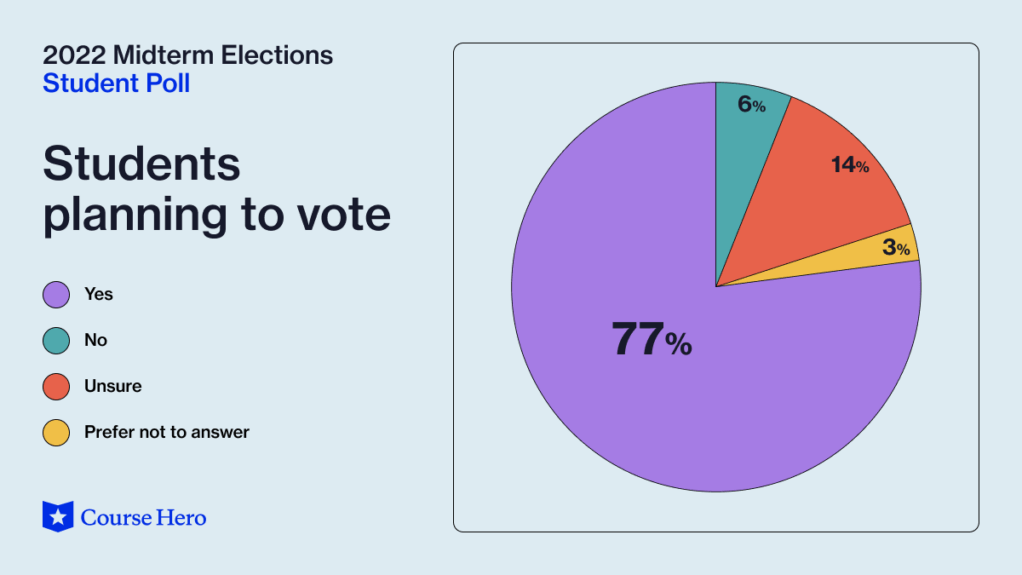 With the cost of college the highest it’s ever been and some colleges having raised tuition by up to 5%, 59% of college students surveyed say it will influence their vote the most. Millennials face more than $1 trillion in student loan debt. As the student debt relief deadline approaches, 48% of female respondents said this issue will have a big impact on their decision to vote, while only 35% of males said the same. 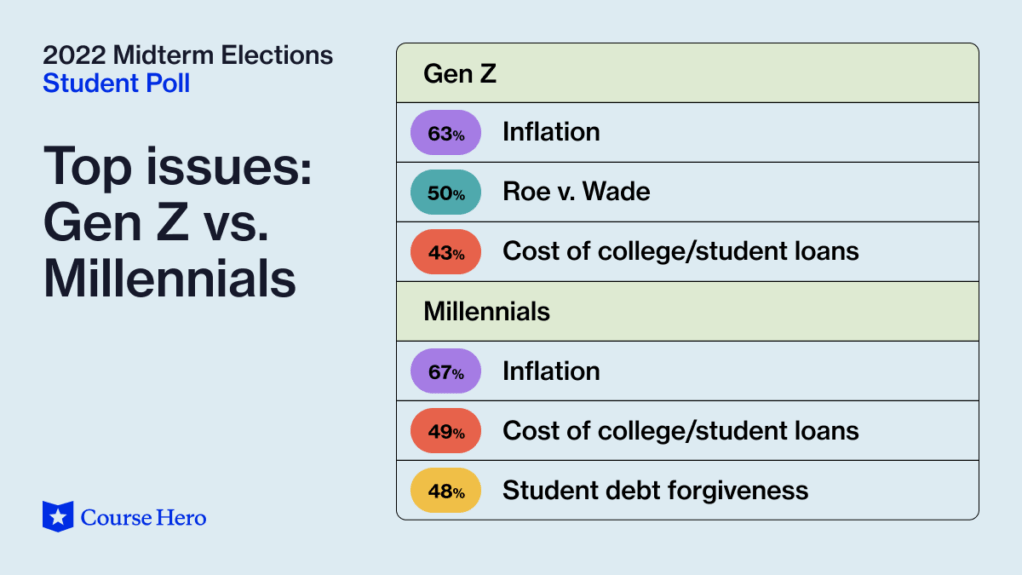 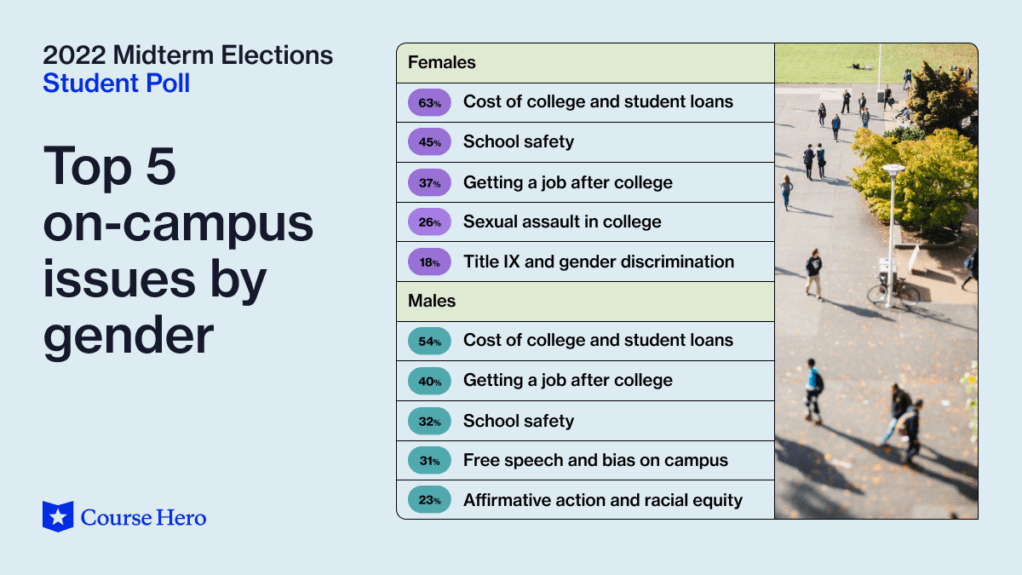 Other campus issues influencing votes include: 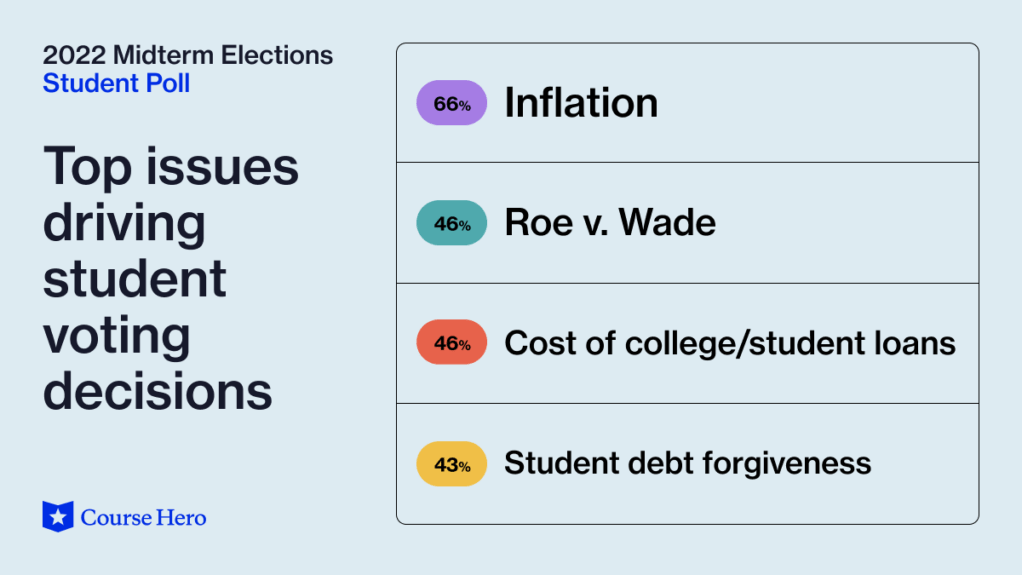 Inflation is the number one driver in college students’ decision to vote. With the rising cost of food, clothes, rent, and other items top of mind, 69% of female and 62% of male college students agree that inflation will have the biggest impact on their vote. All age groups are concerned about inflation and its impact on getting a college degree; 63% of Gen Z, 67% of millennials, and 69% of Gen X students agree. Nearly half of respondents said other deciding issues will be the overturning of Roe v. Wade, the cost of college and student loans, as well as student debt forgiveness.

Democrats vs. Republicans on key issues:

Inflation: 73% of student Republicans and 61% of student Democrats say inflation will influence if they vote the most.

Student debt forgiveness: 60% of student Democrats vs. 25% of student Republicans say student relief will influence their decision to vote.

Cost of college and student loans: More than half (59%) of student Democrats are concerned while only 26% of student Republicans say the cost of their degree is a factor in whether they vote.

Roe vs. Wade: 68% of Democrats and 22% of Republicans agree that the landmark decision will drive them to the polls.

With women’s reproductive rights hanging in the balance, 53% of college students surveyed said the landmark decision will influence who they vote for; this includes 56% of Gen Z, 49% of millennials, and 54% of Gen X students who responded.

59% of female students say the landmark decision will influence who they will vote for and 30% said it will impact where they want to live. More than half (52%) of female students will decide to vote based on Roe v. Wade, while only 34% of males selected it. 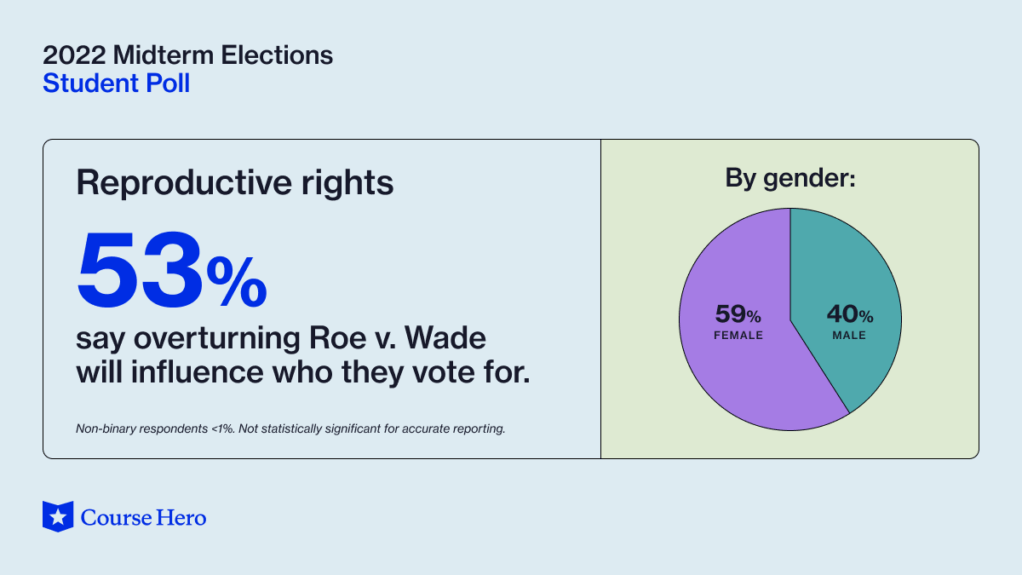 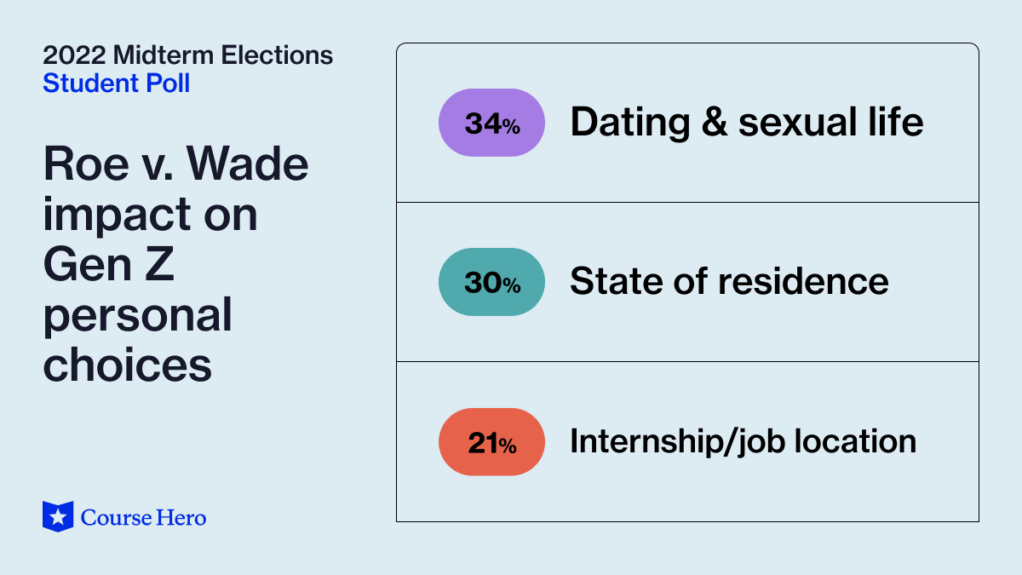 Trust in the Election Process

Notably, nearly half (47%) of students say the election process is either not at all trustworthy or only slightly trustworthy: 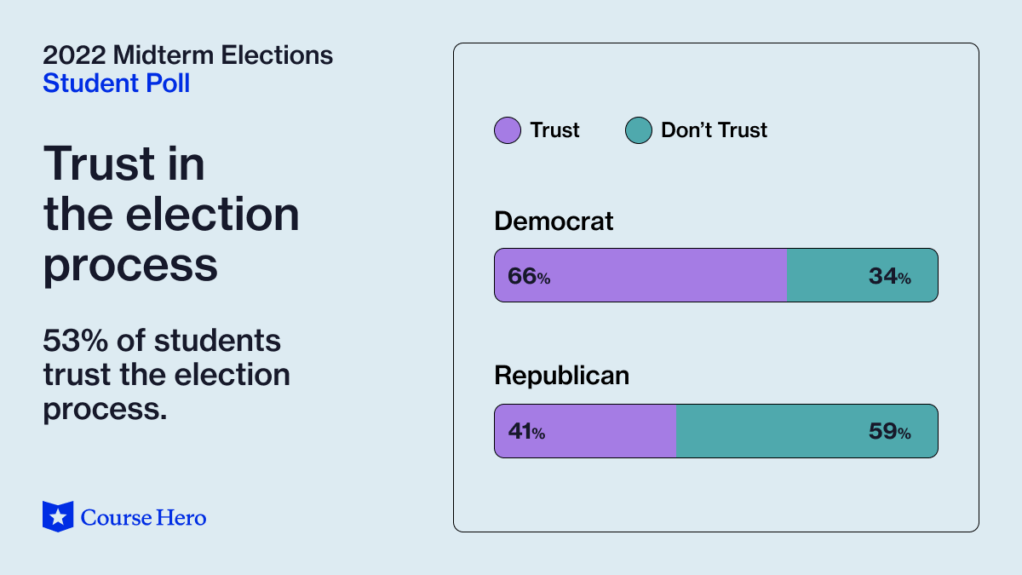 Course Hero performed this study via an intercept survey on coursehero.com. The results of the survey are based on the answers of 1,026 college students who self-identified as being eligible to vote in the 2022 midterm elections. The survey included male, female, and non-binary respondents aged 18+.