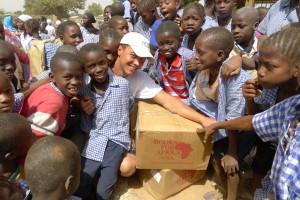 This trip was a life changing one. Over the course of about three weeks in The Gambia and Senegal, I was exposed to an entirely different cultural and educational landscape than what I had experienced in the 13 other countries I have spent time in. While getting to know the educators, students, government officials, and philanthropists in the area, I learned that West African countries are extremely determined to obtain optimal levels of literacy and higher education. However, they definitely have a long way to go and with the help of charitable organizations on a private and government level, they will increase their overall literacy rate and graduate more students to a collegiate status.

For my first couple days after landing in Banjul, I spent some time as a tourist exploring the coastline between Bakau and Brufut Beach observing the local artwork and handicrafts, exploring the beaches, and fending off the vicious onslaught of mosquitoes. (For the record, mosquito nets are just for decoration, not a preventative measure from getting feasted on while in The Gambia). In order to fit in with the locals and establish contact with necessary parties, I went and purchases my very own cell phone from the Africell network. This seemed to be the African version of dominant Verizon network in the U.S., and I was starting to look like a real poser with my local cell phone.

I connected with Megan Mallory, Founder of Hand in Health, and began the planning process for one of the craziest book delivery excursions I’ve ever imagined. Over the next several days, we laid out a schedule to meet with and assemble a philanthropic “Dream Team” consisting of the Founder and Executive Director of Books for Africa, Directors of the Nigerian Emeka Offor Fountation, the Nigerian High Commissioner The Gambia, the Mayor of Banjul, a World Bank Consultant, three physicians, a childrens book author, and three more dedicated volunteers.

Over the next several days we met with the big wigs from the Ministry of Education, public news broadcasters, and headmasters of different school districts. Everyone was extremely excited about our presence in their country, and there were always a ton of photographers and reporters around.

After organizing and labeling the boxes of books according to their intended destination, we made the five hour long journey in a cramped van to Bwiam where we stayed the night at a Hospital. We were met with a huge parade of enthusiastic locals who were celebrating our cause (and the fact that Hand in Health had come back since building the Sulayman Junkung Medical Library). They sang traditional songs and danced with more energy and passion than I have ever seen a group of people do in my whole life!

They sent us off on our journey to literally walk across the country and make stops at more than 20 on The African Book Walk. I was ecstatic to experience something so out of my comfort zone, but extremely nervous at the same time. The sun was beating down hard by 8:00 am and it was already about 87 degrees F with no breeze. We estimated that it would take at 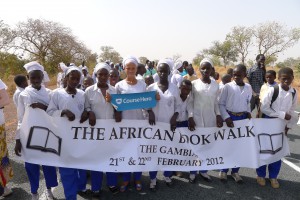 least two full days of grunt work to personally deliver around 10,000 books in boxes that each weigh about 50 lbs. each. (This is not the kind of news anyone is excited to hear before they’re awake enough to register what’s going on).

When we finally pulled up to our first school on the border of the Senegal and The Gambia, the entire student population was already out on the highway waiting for us, cheering frantically as we approached. It was clear that these materials were not only needed, but very much anticipated by the students who would be using them.

We continued for the next two days stopping at schools and unloading several boxes of books that were designated for the grades and subjects where there was the most need. As we neared the end of our journey and approached the northern border of The Gambia, I met one little 3rd grader–DoDou– who made a huge impact on me. DoDou walked with me for at least three miles against the better judgment of his friends and proceeded to talk to me about the U.S. Technology and computers, his lifelong aspiration of becoming a soldier and going to college, and his family. While most of the student encounters I had were brief and hastened due to the quick nature of our book delivery, this one in particular struck a cord in my heart, and I will honestly never forget this little guy. His teacher finally had to track him down and bring him back to school, and he gave me a huge hug good bye and brought a tear to my eye.

Leaving The Gambia was bittersweet, but knowing that I made an impact in at least one student’s eyes was worth the entire trip, the (not kidding) hundreds of mosquito bites, and the awkward farmer’s tan I’m now sporting in the office.