Censorship is at the heart of Ray Bradbury’s science fiction classic Fahrenheit 451. The novel examines a dystopian future America in which all books are banned, with firemen setting ablaze banned books and libraries to keep books out of the hands of citizens.

Book burning itself is millennia old. Ancient Chinese emperor Qin Shi Huang had all the books burned in his kingdom in the 3rd century BCE. It was as though he’d read ahead from George Orwell’s equally dystopian 1984, believing that “who controls the past controls the future; who controls the present controls the past.” More recently, the Nazis held celebratory bonfires to burn the works of Jews and left-wing intellectuals.

Course Hero’s Fahrenheit 451 infographic traces fireman Guy Montag’s transformation from book burner to bibliophile. While Montag was content to burn books at first, he encounters a beautiful 17-year-old, Clarisse, and an English professor and book lover, Faber, who gradually change his outlook on life.

Montag’s wife and friends report his new love of books to the authorities, and by the novel’s end Montag is ordered to set fire to his own house—and the books in it. Montag complies, but when he realizes his boss, Beatty, is going to try to track down Faber, Montag turns the flamethrower on his boss, burning him alive.

Joining a commune of book lovers outside the city, Montag watches helplessly as bombers unleash a nuclear attack on his former home, destroying the city and everyone in it. The exiled book lovers plan their return to rebuild and create a free, creative, and thoughtful society.

Although book burning in the United States is rare, controversial works are often subject to challenge in public schools and libraries. Half a century after the book’s publication, Fahrenheit 451 is still among the most banned books (#69) in America. 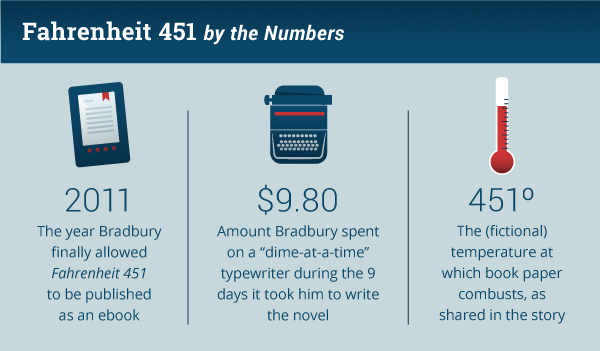 Course Hero’s infographic takes readers behind the scenes, giving insight into the twin themes of censorship and technology and how they permeate each of the book’s 3 sections. It also provides some mind-blowing facts. For example, Bradbury wrote the work in 9 days, renting a typewriter by the hour and spending $9.80 to draft the work. And, though Bradbury was obviously opposed to censorship, it wasn’t until 2011 that he allowed his famous work to be published electronically.

And what about that 451 in the title? It’s the fictional temperature at which book paper combusts.

How to Read Faster and Retain More Information