To get the data-goods, we looked at student traffic to Course Hero on the Tuesday before Mardi Gras in 2018 and compared it to Fat Tuesday, which landed on February 13, 2018. We examined college-level study sessions, as well as regional and national data to understand exactly who is partying … and who is abstaining. (See the full methodology at the end of this blog post.) 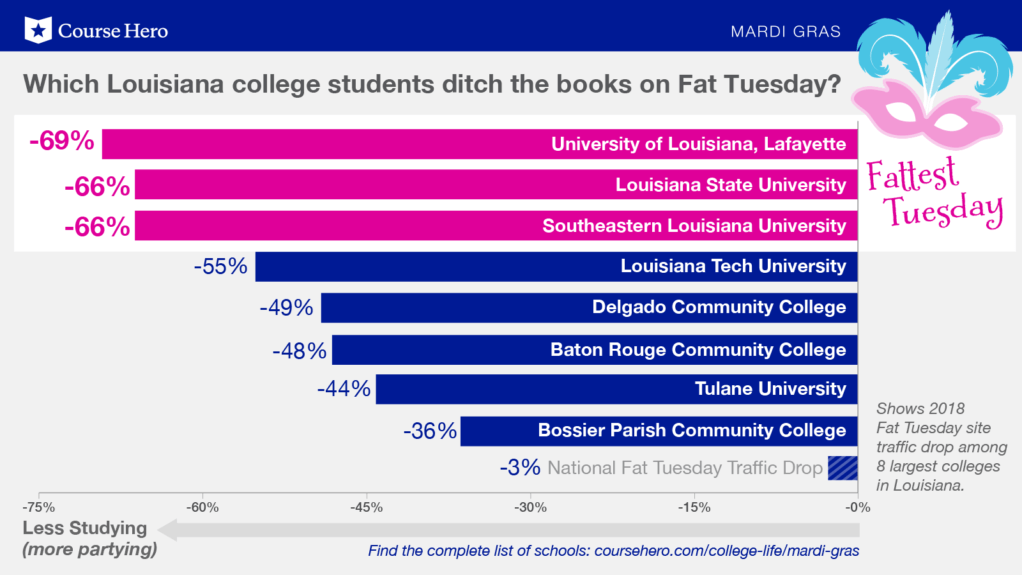 What school rebounded the fastest after letting the good times roll? Tulane. While Tulane University dropped 44% on Fat Tuesday, it bounced back quickly the day after, resuming visits to the Course Hero site at 120% the rate observed during Mardi Gras … even while its neighbor schools were still showing unusually low visit rates 24 hours and 48 hours after Fat Tuesday. (To be fair, some schools in New Orleans—aka NOLA—schedule Spring Break around Mardi Gras … so no judgment!)

All of Louisiana lets the good times roll

We know from the data that Mardi Gras is not just a New Orleans-focused carnival—it’s a party across the state. Nearly every school we looked at in Louisiana showed a drop in study traffic, and nearly all showed significant, double-digit drops. And we have to give it to public universities: When we ranked all the schools by the drop-off in traffic, the top 10 spots were occupied by public universities across the state.

Are Some Study Snacks Rude?

Studying on Fat Tuesday? Not in NOLA

Not surprisingly, Louisiana schools party a lot more on Fat Tuesday than other schools around the country. The national average for the Tuesday-to-Tuesday traffic drops was only -3% across a random sample of colleges and universities using Course Hero in 2018. (The Tuesday-to-Tuesday drop is the drop in traffic observed between two consecutive Tuesdays in 2018, the latter of which was Fat Tuesday.) Among the colleges we studied outside of Louisiana, University of California, Los Angeles, was among the schools that take Fat Tuesday most seriously. UCLA students drove a 13% drop in traffic on that day in 2018.

Below find the full list of the Louisiana schools examined by Course Hero and the traffic drop associated with each one. Also find Course Hero’s methodology for this study.

Research compares students’ study sessions on Course Hero for users in Louisiana on two consecutive Tuesdays in February 2018. All traffic data was summarized by college/university; only those schools with a minimum sample size were selected (>50 study sessions per school on 2/6/18). National average based on a random sample of student study sessions at colleges and universities across the country.

Can You Study Too Much?