BA in Scene and Lighting Design, MFA in Production Design

Plays, musicals, and films are designed to move us, inspire us, and provide us with a new perspective on life. Much of the magical mechanics that help make that happen are unknown to members of the audience, who are content to sit in the dark, letting the words, music, and visuals wash over them. But studying the form and function of theatre—the magic behind the mechanics—requires a more active approach.

To help his Intro to Theatre students dig more deeply into how drama is conceived and ultimately rendered onstage, G. “Max” Maxin IV, MFA, asks them to put themselves in the shoes of the makers of theatre. Specifically, students must consider a key moment in a theatre production that they read and listened to, reflect on their own responses to it (thoughts, images, impressions), then reinterpret the moment in a physical art form—such as a model, diorama, or collage.

“I got the idea in grad school when I was teaching an Intro to Design class, and I chose a song by Pink called ‘Funhouse,’” he says of his first similar assignment. “The idea was that students needed to create something that was representative of what they thought a funhouse was, in Pink’s description, [based on] her lyrics.” For Maxin’s own class, he prefers that students read and listen to an actual theatrical production (rather than a song), but the thought processes required are similar. However, he adds, “I wanted [my assignments] to be a completely obscure piece that they would be unfamiliar with, to reinforce the freedom to create anything without preconceived notions.”

He calls this interpretive (or reinterpretive) project Design Inspiration, and it gets students to think more deeply about how theatre art is inspired and constructed.

Nonmajors may have zero experience with theatre

As exciting as theatre can be for audiences, simply watching or reading a theatrical work does not reach the level of “active participation.” Further, Maxin discovered that his students at NEIU had seen few, if any, live theatre productions, which made it all the more difficult for them to connect to the works. (The majority of students in this class are usually nonmajors, and even those in the Communications, Media, and Theatre department are usually concentrating on communications or media.)

Maxin wanted to help his students interact more directly and emotionally with the medium. To get them out of their comfort zones, Maxin says, “I needed something crazy.”

Create a 3-D design from a theatrical moment

For his Design Inspiration exercise, Maxin asks his students to take any scene, line, or song from a theatrical production and turn it into a piece of artwork—one that has both form and substance.

Most recently, he had his students use the script and soundtrack from a bizarre and explicit stage production based on traditional German fairy tales—with shocking results.

“All through high school we’re taught there is a ‘correct answer,’ and in these kinds of projects, you have to get away from that. [Students] have to know that, no matter what, the risk they take will be rewarded—even if it’s wrong—and it will be rewarded because you cannot learn from it unless you have that little failure.”

Course description: Survey of the components of theatrical experience and the function of the various contributors to theatrical production.

In Maxin’s recent Intro to Theatre classes, he assigned the 1998 musical Shockheaded Peter as the basis for their creative effort. The book and lyrics are based on Struwwelpeter—a set of dark German fairy tales written by nineteenth-century author Heinrich Hoffmann—and they involve plenty of unusual elements, including pantomime and puppetry.

Here are the steps he uses to help students explore their emotional responses, do some intellectual research, and present a physical representation that sums it all up.

Start with a read-through

As is standard procedure at the start of theatre rehearsals, this project begins with the class reading the entire script aloud in class (aka a “read-through” or “table read,” he tells them). Maxin assigns each student to read a particular part in one of the musical’s multiple vignette-style scenes, and he used YouTube to play the show’s musical numbers.

Maxin has a unique method for divvying up the lines among the student readers: He offers marbles to those who volunteer—for this assignment as well as for others throughout the semester. At the end of the semester, whoever has the most marbles can sell their textbook to Maxin for what they paid for it. “It’s a way for me to get more textbooks for students who can’t afford them,” Maxin says, “and nothing motivates us to participate in a group situation like the possibility of winning back your money.” Once the students become comfortable with each other, he adds, it’s a lot easier to get volunteers without having to offer rewards.

Ask questions to guide their selections

As the show unfolds in class, Maxin watches his students’ reactions and asks them open-ended questions about what they are experiencing. This cues students to pay attention to their emotional responses, which will help them select a song or scene to use as the basis for their project. Maxin then pairs them up based on their selections.

After their song/scene selection is made, Maxin again asks them questions: What sets those elements apart for you? How would you summarize your scene/song in one sentence? This is the beginning of the creative process, in which they must figure out what they are feeling and observing—and how to represent that visually. He is essentially teaching them about concept statements in theatre design, although he doesn’t explain the connection until later in the class, when discussing the design process. For now, he is simply trying to get his students to observe their selection with fresh eyes, without defaulting to a preconceived “correct answer” to his questions.

Turn them into dramaturges

The next step is not to choose the form their project will take, adds Maxin. First, they will need to do a considerable amount of research. After dividing the class of 18 students into teams of two, Maxin encourages them to use a metaphor to form a strong, guiding visual image for their project.

“This play is a broken window, or a destroyed home, or a sparked match,” says Maxin, referencing some of Shockheaded Peter’s strange storylines and climaxes. “Then [they] take that metaphor and go out and research and find more to build on to turn it into a project.”

He then asks each team to collect five to 10 research images that reflect the concept and style of their project. How they collect the images and information is up to them, but the research needs to be in depth. “The images are the summation of what should be piles of research in a variety of directions,” Maxin explains. “The final images they present should be what remains after a rigorous editing process, so that they strongly reinforce their ideas and are the few remaining, not the results of a brief Google search.”

He also asks them to consider input other than their own interpretation. “I want them to focus on the playwright’s intent,” he says. “So they have to research the person who wrote the story.”

Finally, he asks them to go through the work—particularly their selection—and look for dialogue and body language and subtext that reveals additional layers of meaning. “The goal is to make it impossible to create the [project] without thorough research, without thoroughly working through the piece and finding dialogue and other aspects to support it,” Maxin says.

Tell them you expect the unexpected

Next comes their plan for the design interpretation itself.

Shockheaded Peter offers a cornucopia of strange and arresting visuals to ponder, so there is no excuse for students to turn in a boring project.

“The only rule I can give you is what I don’t want to see,” Maxin tells his students at the beginning of their creative journey. “Because anything else is cool.” He says he does not want to see the usual collage placed on a trifold board. “If they feel super comfortable with the path to creating the final project and can see its progression very clearly right away, it’s probably not the idea I am looking for.”

Previous interpretations from Shockheaded Peter have included dioramas, sculptures, and three-dimensional collages that illustrate the musical’s vignettes about parents being murdered by an unwanted child, dogs eating a child who abuses them, and other hair-raising scenes. 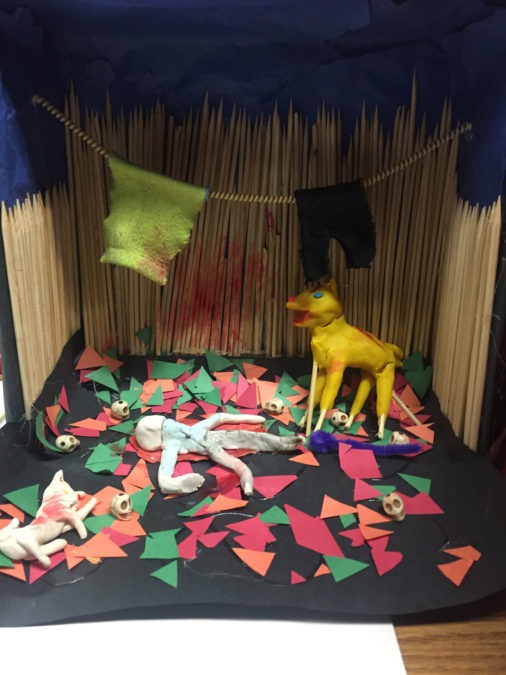 Build problem-solving into the plan

Even after a concept is selected, students are not ready to begin work. They will first have to create a plan—and then revise and revise again.

“I’ve learned through [theatre] design that whenever you plan something, you’re always going to plan it wrong [at first],” says Maxin. It is only when you start to implement your design that you start to see what will work and what will not, he explains. “There’s always going to be physics that you have to deal with. And theatre [design] never plays with physics the way you want it to. But every step you take is the right step for the one you need to take next,” he tells students.

To foster progress, he repeatedly asks them to explain how and why they are have arrived at their design decision—and why they are implementing it in a specific way, once they finally do start the assembly.

Maxin does not want to stifle students’ creative process, so he has rewritten the typical script on “critiquing” to be more positive.

“If there’s anything that I’m commenting on or criticizing, it’s done in a nice, roundabout way,” he says. For example:

“That’s amazing that you went to that place. Now what does that place mean? What did you learn from that place? How could you go in another direction? Where did you hit a wall, and how can you push past it?”

For Maxin, the thought process behind the project is almost more important than the outcome itself. “All through high school we’re taught there is a ‘correct answer,’ and in these kinds of projects, you have to get away from that,” he says. “[Students] have to know that, no matter what, the risk they take will be rewarded, even if it’s wrong, and it will be rewarded because you cannot learn from it unless you have that little failure.”

In theatre, your work must be presented for the world to see. So Maxin has his teams present and explain their projects to the class at large. He is especially interested in having the projects follow the traditions of modern art, where spectators can walk around, look inside, and view a project from multiple vantage points.

“I wish someone would build something life-sized!” Maxin says. “Pushing their ideas that far is exactly the kind of thinking I’m looking for, mostly because it sounds absurd at first.” Nonetheless, presentations are three-dimensional and set up so that the viewer can walk around from piece to piece. The goal at this stage is more to celebrate the work than to quiz students about what they did. “I have gotten updates step by step, so now it’s just students sharing those ideas and processes with each other.”

Maxin says that clearly some students have a harder time with this creative assignment than others. “Some students find it difficult or frustrating working outside the rule structures they are used to,” he observes. “But I’ve found that many of the students find it super freeing, and their work from that point on takes on a different shape, more thoughtful and open.”