To get nonmajors excited about learning Spanish, this University of Virginia lecturer helps students track their progress with an ePortfolio.

Challenge: Getting nonmajors excited about Spanish

Matthew Street was up against a philosophical problem that most instructors in beginning-level college courses share: First, he wanted to inspire students who may not be future majors to fully engage themselves in the course. Second, he wanted them to get something of lasting value from his class.

“What I was trying to resolve was: How can we show students that they can become really proficient in Spanish as a side project to their chosen field of study?” says Matthew Street, a lecturer in Accelerated Beginning Spanish at the University of Virginia since 2013.

In the fall 2015 semester, a provocative answer presented itself: the ePortfolio.

Street was convinced that students could learn more effectively – and feel more engaged in beginner-level courses – if they understood not only the material but also their own most effective mode of absorbing it. What’s more, if they were to have a concrete representation of their progress (something visible, measurable, undeniable), they would develop greater confidence in their potential to soak up any subject matter.

By addressing student progress using the ePortfolio, and seeking a creative take on numerous exercises that would feed into this collection, Street felt that his students not only would be more engaged and interested in his course but also would grow as Spanish speakers, global citizens, and lifelong learners.

Innovation: Tracking progress via an ePortfolio

The ePortfolio was the perfect solution to interject “added value” into Street’s 1000-level course. In 2015, he piloted UVA’s use of this multimodal, online virtual space. In an ePortfolio, students can collect and reflect on their work all semester—and, ultimately, over the course of their college careers—so they can see their progress and learn about themselves as language learners. They then can extrapolate from that, applying their newly identified “best study practices” to other subjects.

“The ePortfolio showcases who the student is, apart from her degree and transcript,” Street says. “It’s important for any student to have a portfolio, even if it is not course specific.”

What grabbed Street was the idea that the portfolio would provide each student with not only a place to accumulate their work product and performance data but also a way to demonstrate how much progress has been made, enabling them to compare the quality and feedback of their recent work to the work produced at the outset.

Street designed his version of the ePortfolio program in the summer of 2015, piloted it in his fall 2015 classes, and, after establishing it as a success, migrated it from WordPress to a platform called Digication in the spring of 2017. In the process, Street created a set of exercises and activities that take advantage of the ePortfolio format, and he has used them with his classes ever since.

Course: SPAN 1060: Accelerated Beginning Spanish
Frequency: Three 50-minute meetings per week
Class size: Three sections; 18 students per section
In his words: “This is the entire first-year Spanish curriculum, taught in one semester. It is demanding, compressing a lot of content into a single-semester course.” (Students must test into the program or else take regular-paced Spanish.)

Street’s class is taught in a flipped style, in which most grammar is absorbed outside the classroom; class time is devoted to Spanish-only discussion and enrichment. Because the students here have tested into the class (and otherwise would be placed in a non-accelerated beginning Spanish course), the rigor is welcome—as is Street’s creative approach throughout the semester. In addition to using the ePortfolio itself, he has also sought to add inspiration to the lessons that provide fodder for it.

During the first week of the class, each student records herself delivering a monologue that provides a sample of her Spanish to serve as a baseline or anchor point. Just prior to the course’s completion, the student records a longer (2- to 3-minute) monologue so she can see how far she has come in one semester. To be able to see that progress, however large or small, is a confidence builder. 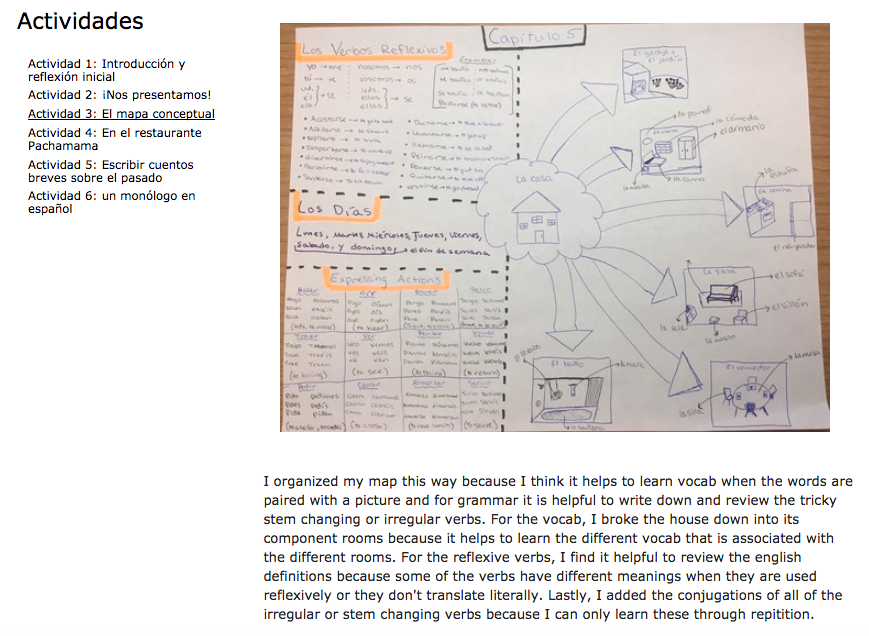 Each student is required to build a concept map that graphically connects Spanish vocabulary, verb conjugations, cultural references, and personal organizational methods that help him study. Students can choose any medium they prefer: For example, they can draw and color by hand, or they can use a computer program such as Adobe Illustrator and/or Photoshop, Excel, or PowerPoint.

“This activity comes up after the first exam of the semester, when a lot of students are shocked by their performance and they are open to new ways of studying,” Street says. “It exposes them to a way of studying that they are not used to. Seeing and talking about and reflecting on these maps has provided a platform for students to see how they connect these verbs with this vocabulary theme.” It’s also a study skill that’s transferrable to any other course they take.

A contextualized game of “real estate”

It’s common practice to include tourist-targeted vocabulary and role-playing in language coursework, which Street does in an exercise encouraging listening comprehension and fluency in a restaurant setting. He has also taken this contextualized approach into other, more surprising areas of life, such as an exercise in which students find and sell an imaginary property within a virtual community in another country. “That’s an activity that one of my colleagues created, and I’ve adapted it,” Street explains. “It’s very popular; it gives them a goal that adds context to what might otherwise be a rote grammar practice.”

In SPAN 1060, ePortfolio activities account for 20% of a student’s grade. Of course, grading a portfolio is different from the traditional paradigm of giving out assignments and tests and grading them one by one. A new rubric was created by the language coordinator, Emily Scida, when the ePortfolios were initially rolled out, with the following percentage breakdown:

Regarding student performance, Street is unaware of data that specifically demonstrate the impact of ePortfolios on grades or other measures of success. But in course evaluation surveys, 82% of students said they either “agree” or “strongly agree” with the suggestion that using the ePortfolios has increased their ability to learn. They also registered mostly favorable impressions of the video monologues and the concept-mapping exercise. More than 1,000 students are using ePortfolios at the university each semester. Because UVA has a university-wide license, students don’t have to pay for its use.

The ePortfolio program has been adopted by all of the Spanish classes at the 1000 and 2000 levels, and even some writing-intensive 3000-level courses such as Business Spanish and Medical Spanish, where students could be presumed to have high confidence in their ability to learn. In these cases, student contributions have less to do with grammar and more to do with expressing complex concepts. But the principle of measuring progress through reflection is the same.

“Creating things like the concept map made me take the time I normally wouldn’t to create something that really did help me study. I ended up making concept maps for other chapters as well, and they really helped out a lot. Without that activity, I would’ve never done that well on my own, and I am more than glad that we did it.”
—
“I loved the [ePortfolio] activities because it was the only time I could hear myself speak Spanish, and it helped me learn.”
—

“[The ePortfolio] helped me recognize the importance of how understanding Spanish isn’t just involving vocabulary and grammar. Understanding speaking and culture is just as important.”
—
“I put so much time on [the ePortfolio], but I think it is worthwhile, especially years later when I look back to my Spanish learning process, I will remember what I have done and feel proud about it.”