A Virginia Tech professor’s photo treasure hunt takes geography students outside to learn about their university, each other, and the outside world.

MS and BA in Geography

“The idea of people just staring at a screen for 10 billion hours a week slightly troubles me,” says John Boyer, a lecturer who has been teaching a wildly popular introductory-level World Regions course at Virginia Tech since 1998. His course, after all, pivots on the principle that students’ personal success “depends upon a global awareness and global engagement to meet the challenges of our time.” Boyer has always enthusiastically woven culture and politics into geography to help students perceive other nations not as colored shapes on a map but as homes to real people with unique and complex lives not entirely unlike our own.

Ironically, though, the popularity of his World Regions course was the very reason Boyer had to transition it to an online format five years ago. (Today, it reaches about 3,000–4,000 students per year.) So, this “professor of place” was faced with a digital-yet-real conundrum: He wanted his online course to retain some offline activities to keep students connected to the real world.

“As [a professor of] a totally online class, I’ve always been trying to challenge myself but also challenge the students with having some sort of active component,” says Boyer. “Because I’m old,” he jokes, “so I kind of like still having action.” (Note: This 40-something prof is only “old” by student standards.)

Boyer rose to the challenge, generating an activity that requires students to power down their computers and power up their brains as they embark on a photographic treasure hunt. Its code name? Place Your Professor.

An outdoor activity for an online class

Boyer has long been known for his creative approaches to “avenging international ignorance and injustice,” sometimes with the help of his alter ego, The Plaid Avenger; his series of graphic novels; and a textbook, The Plaid Avenger’s World—all of which feature this character in a variety of geographical locations.

The idea for Place Your Professor was hatched in the summer of 2015 when Boyer was preparing to participate in that fall’s Semester at Sea program. During his time sailing and teaching in the Mediterranean, he would also continue to teach his online World Regions course for the students back home—and the “distance” in “distance education” loomed large. “[My assistant, Katie Pritchard, and I] were sitting around thinking of interesting ways to keep people engaged not only in an online course but an online course where the professor was not even in the country,” he says. As their discussion drifted onto the topic of the popularity of selfies, Boyer wondered laughingly, “How can we use this horribly self-absorbed behavior for something educational?”

Boyer decided to seek out interesting and lesser-known places on the VT campus and take a photo of himself, including enough identifying information in the background to allow his students to ascertain his location. He would then ask them to recreate the image as closely as they could. Point totals would depend on how quickly they completed the assignment and how closely they replicated the original photo.

The activity, says Boyer, had a two-pronged approach: First, it added a real-world community-building component to the class. “I’m going to get you out and about for my class, doing something active and exciting,” says Boyer. Second, it provided first-year students a connection to their new educational home. While the class is only about 50% freshmen, that is significant when you consider that its enrollment is well over 1,000 students.

“We do have a lot of incoming freshman, especially in the fall,” says Boyer. “So [I was thinking that] we could actually use this as a tool to get people introduced to different parts of campus.” As a bonus, it also turned out to be an eye-opener for upperclassmen and even some educators, who thought they had seen every nook and cranny of the campus. (More on that later.)

Course: GEOG 1014 World Regions
Frequency: 3 hours of online lectures each week, broken into 10–20 minute segments, depending on the topic
Class size: 1,500–2,000 per semester
In his words: “Utilizing a variety of topics, technologies, and graphic [media], I am
absolutely passionate about providing the highest-quality learning experience that will produce global citizens and leaders prepared to positively shape the future of the U.S. and the world.”

Each week, Boyer sends an email to his students with a new photo challenge and rubric, as well as reminders of how to submit them (via Twitter or Instagram). Here, Professor Boyer offers a snapshot of the Place Your Professor assignment and how well it has been received.

He would love to see other instructors, especially those teaching online courses, follow his lead, requiring students to engage with the real world even when instruction is happening online. “I think there should be way more of this,” says Boyer. “I think [students] should be out taking movies of where they’re at, or there should be individual projects where you have to link up with other people in your community or online as part of the class. I don’t even care what the topic [of the course] is. I think [this is] the future of [online instruction].” Here is how his Place Your Professor assignment accomplishes this—and more.

Accentuate the positive with a flipped syllabus

Boyer begins with an unconventional grading system for this assignment, and the rest of the coursework, too: Rather than starting every student with an “A” and deducting points throughout the semester based on their performance (or lack thereof), Boyer uses what he calls a “flipped syllabus.” Boyer provides a list of assignments and activities from which students can choose, accruing points accordingly. Each student’s overall point total determines their final grade. Offering options allows students to select activities that they find interesting and engaging, and this provides them more opportunities to succeed in the course.

It also (almost) goes without saying that it feels better to rack up totals than to take hits for slipups. By focusing on the amount of success rather than the amount of failure, students feel freer to take risks and get creative.

Many assignments in college offer all students the same possible point total upon completion, but Boyer literally gives bonus points for students who do not procrastinate and do show attention to detail. Here is the scoring breakdown for this assignment:

"Trees, bushes, and the air is perfumed with blossoms. I found happiness in that place." 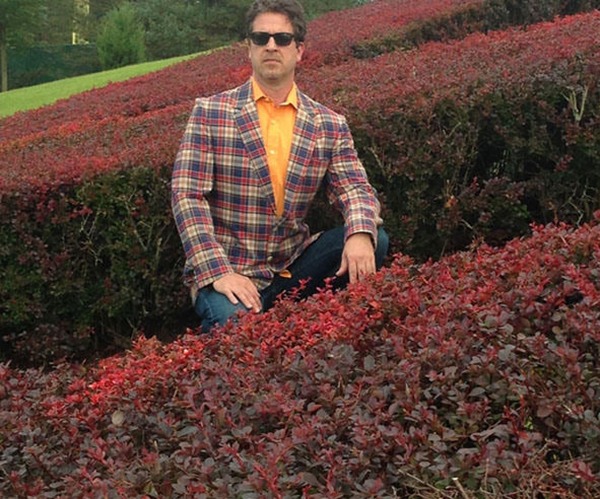 The VT bushes at the Southgate entrance of campus is a must-see before you graduate. They were planted there at some point, and I'm sure they're kept by the awesome landscapers because bushes don't just grow like that. That'd be sweet, though. Anyway, they are located in front of the baseball field and the Miller-Johnson Track, welcoming returning students back for another semester, and saying bye to students who have finished at Tech and are moving on to bigger and better things in their lives. They also serve as a testament to the tangible school spirit coating the Virginia Tech campus, reminding the world that, though we have had our hard times, Hokies will always band together and support each other through anything and everything, from the day we step foot on campus for the first time and continuing for the rest of our lives.

At the bottom of each week’s email assignment, Boyer includes the answer to the previous week’s challenge, along with some information about the location and its relevance to the VT campus or community. (See the Virginia Tech Bushes answer example, inset.)

For Boyer, part of the fun of the activity is coming up with fresh new places for the assignment, and he has reached out to other campus community members for ideas. “When we started poking around with the idea, we got really excited because we’ve been here forever, so we know a lot of the little niches and cool things on campus. We started asking other people, ‘Hey, what would be a cool thing to introduce people to that maybe they’ve never heard of on the VT campus, that they might not even stumble across in four years?’ And we were amazed at the stuff that we thought everybody knew about, [but] even the locals didn’t know about!”

Participation in the Place Your Professor activity has been strong, or as Boyer says, “It has a cool factor, and it seems to work.” Course statistics show that the first activity of the semester will see hundreds of submissions, then as students gain more points and get busier, it tapers to about 65–70 in the last week of the semester.

“There’s always a core of people who love doing it and they think it’s the greatest thing ever, and so they’ll do them all even if they don’t need the points,” Boyer notes.

In fall 2017, of the 1,460 students in the online World Regions course, 452 participated in at least one Place Your Professor activity.

Another unintended but welcome outcome is hearing positive feedback from venues on campus that Boyer is helping his students discover. He shares this email from the director of the Museum of Geosciences, received after Boyer’s photo assignment featured the resident dinosaur:

The popularity and inherent fun of the assignment is evident in the selfies that students post. In addition, Boyer receives the occasional email from a student, thanking him for helping them to discover a new, treasured spot.