Facts are stubborn things; and whatever may be our wishes, our inclinations, or the dictates of our passion, they cannot alter the state of facts and evidence.
—John Adams

Although a particular fact may be solid and unwavering, the interpretation of that fact can be subject to change depending on the person exposed to it and the manner of presentation. The fact is, “our wishes, inclinations, and passions,” as well as unconscious biases, can dramatically affect comprehension and resulting decisions based on the facts. At the center of both my teaching and consulting work is the goal of helping a range of people with differing perspectives clearly and meaningfully assess, understand, and make decisions based on data and information. As education increasingly moves online, there are many possibilities to present information in ways that address the variability of how students perceive the content. Simply presenting information without devoting some consideration about the characteristics of the audience and the context can be important omissions. In this article, I am going to point to two sections of my toolbox: Design Thinking and De-biasing, both of which often require taking on unfamiliar points of view.

It is better to look at problems from many angles to get a more accurate understanding and find practical solutions. To control the single perspective instinct, get a toolbox, not a hammer.
—Hans Rosling, MD

Finding answers to complex problems and developing innovative ideas sometimes requires a big shift in perspective. The best solutions only emerge when you consider the question from an entirely different angle than your typical vantage point. I’ve found this to be true in much of my consulting work and try to convey this view in the classes that I teach.

These perspective shifts can sometimes be more rooted in emotion, while others are more cognitive in nature. Either way, the results can be powerful. I’m going to illustrate what I mean with examples from both design thinking and data visualization.

Let’s start with what I believe is the “secret sauce” of design thinking: using empathy as a perspective-shifting tool for problem-solving. Near the beginning of the class, I share a famous example (simplified for storytelling purposes) of the use of empathy to address a real-world problem.

Flipping the script with design thinking …

You may recognize this machine—an MRI. It is a medical imaging device that is an essential diagnostic tool for healthcare providers, but it can be intimidating to patients … especially if those patients are young children. 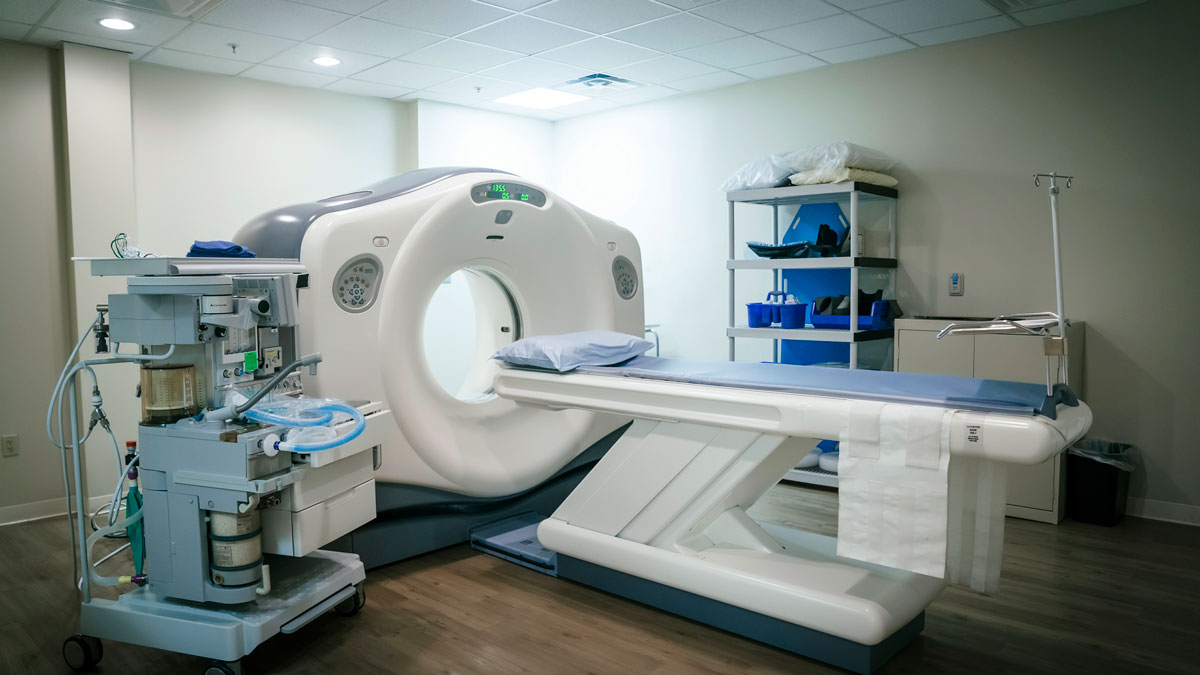 It’s important for the patient to remain perfectly still when lying on the MRI, but that’s a tall order for a frightened kid. There are many potential ideas to address the challenge of scared and squirming pediatric patients.

Let’s try using empathy to bring a new perspective and perhaps some new solutions. In essence, empathy is about putting yourself into someone else’s shoes, as opposed to sympathy, which means feeling compassion for someone else. If we imagine ourselves as an anxious child, then perhaps other ideas can emerge.

This is what engineer Doug Dietz did when he tapped into two powerful attributes of children—vivid imaginations and natural inclination to play. The script was flipped from a frightening experience in a stark scene to a pirate adventure. The MRI machine is transformed into a pirate ship and, with the help of some clever wardrobe changes, the healthcare providers become part of the play.

It’s one thing to imagine being in another person’s shoes, but it’s another matter to actually wear those shoes. That’s the power of prototyping and simulations. They help to embody our creative thinking. Importantly, prototyping can bring to light problems or complexities that might not be apparent otherwise.

For example, in one of the design thinking classes I teach, there’s an exercise to create prototypes of special eyeglasses, which are intended to help the wearer overcome a problem. Once, a group of students presented a pair of glasses that were meant to help blind people navigate around a room. A student, taking the perspective of a blind person, asked what happened if the glasses were misplaced: How would they be found by the user without the help of the glasses themselves? One idea that emerged was a small bracelet that, unlike the eyeglasses, the user could wear all the time to help track and signal the location of the missing glasses. For me, the key is not the specifics of the solution but the fact that the students were thinking about the problem from the user’s perspective and were therefore able to come up with ideas that fit with the people who might be using the device.

The medium and the message

Communicating a core idea for different perspectives is not only an exercise of empathy and imagination. Thinking about different modes of expression for different types of audiences is something that I emphasize in every class I teach. In my design thinking class for UC Berkeley Extension, I give the students the same key task, but I encourage a variety of ways to achieve the same fundamental goal. For example, student teams are given the same goal of helping the UCB Extension Art and Design Department to help increase awareness about what they offer to prospective students. Each group has to decide on a target audience, think empathically about them, and then determine an effective vehicle for reaching them. In some cases, it might be a website, or a video, or a live event such as an exhibition.

In the case of the video, the team worked on showing the life of an international student to make the message more relatable. The idea for the video arose, in part, from trying to literally capture and express something from a particular perspective, and the resulting content was an embodiment of empathetic thinking.

Because technology always has a human dimension and impact, design thinking can be applied to problem-solving for emerging advanced technologies. For example, I was a panelist and facilitator for a meeting called Synthetic Biology and Design Thinking: Multidisciplinary Paradigms and Possibilities.

My fellow panelist, Ryan McGuinness, discussed the opportunities to use bioengineered organisms to help remediate toxic waste sites and other environmental pollution, including oil spills and plastics dumped into the oceans. How does empathy fit into bioengineering projects? Well, for example, while synthetic biology holds a lot of promise to solve problems in areas ranging from environmental protection to medical care, it can also ignite understandable concerns in the communities it affects about potential unintended consequences, ethical concerns, and other issues. Design Thinking can be used to consider the impacts of creating and applying advanced technology solutions in ways that take affected communities directly into account and even involve them in the decision-making process. This can include the ways in which novel technological solutions are communicated, deployed, and managed for the people they impact most.

Breaking through biases and blind spots

Using empathy is one way to help people shift perspective for problem-solving and gaining insight, especially in design thinking. However, for data visualization classes, I talk about another type of perspective-shifting. In this case, it’s about becoming aware of our own unconscious cognitive biases.

Let’s look at an example that I’ve slightly modified for illustrative purposes. During World War II, Allied bombers were being shot down at an alarming rate. To help address the problem, more armor plating was needed to protect aircraft. However, more armor meant adding more weight, which would result in reduced fuel efficiency and agility in flight. Investigators looked at the patterns of damage, and they analyzed statistically where to put the extra metal plates to maximize the protection while minimizing the extra weight. I show students a model plane with areas that were seemingly prone to problems based on damage assessments.

Typically, and understandably, students would suggest only putting the plates on the areas where there were recurring patterns of serious damage. What would you do?

I then ask the students to consider the idea that the last place to add those plates would be to the areas that sustained the most damage. Many in the class are surprised, but think about it. . . . The planes that are being investigated for damage are, by definition, survivors. They made it back despite the damage they sustained. It’s the planes that didn’t make it back where the damage pattern would be a potentially important part of the answer. It’s the out-of-sight-out-of-mind data that makes the difference.

How to Build Empathy in Students with Universal Design Principles

This kind of example and aha! moment helps to get students to think more deeply about what’s shown, and what’s not, in a chart or graph of some kind. I then ask the students if there is a way to visualize the damage pattern in the surviving planes, such as presenting an inverted image alongside the original one, to suggest areas that might be susceptible to catastrophic damage. In other words, draw the students’ attention to the places that might be overlooked due to a common bias. The goal is for the students to experience their own hidden cognitive biases and consider various ideas and tactics to counter their cognitive blind spots.

The elephant in the classroom

In both the design thinking and data visualization classes, I talk about the power of stories to capture the essence of ideas. One ancient fable, which seems far away from a subject like data visualization, is about the three blind monks and the elephant. In the story, three men stand next to an elephant: They are trying to figure out what is before them. The first monk touches a tusk, the second an ear, and the third the tail.

They soon began arguing about what this thing was: The monk who touched the hard surface of the tusk had a very different idea than the one who felt the cloth-like ear or the monk who sensed the rope-like tail. Rather than fighting, they could have shifted their view to consider what kind of thing could have all these attributes. Instead of arguing, they may have paused and perhaps heard the sound of breathing. Taking a broader view and considering other data points might have led them to a better answer and conversation. 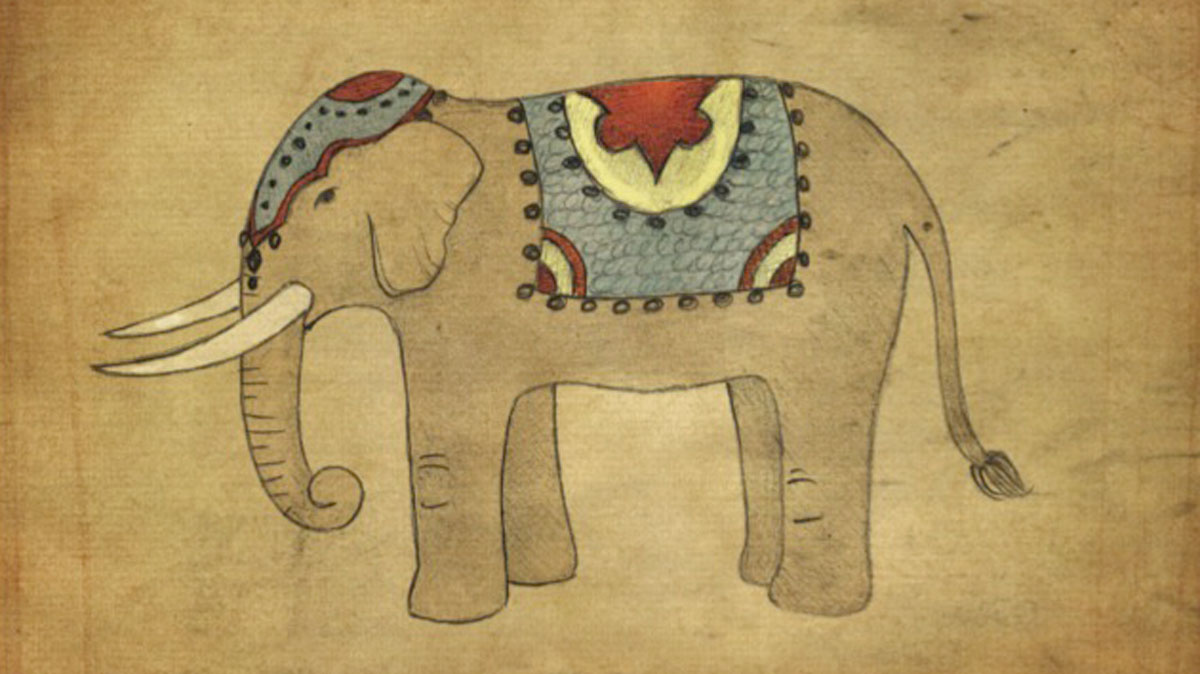 This is true in the context of the fable and is also true for problem-solving in our world today. Developing a greater awareness of the strengths and weaknesses of our own perspectives and being able to exercise empathetic thinking are important in many areas of study—and in life, for that matter.