Basic Parts of Speech • Parts of Speech Classes: adjective, adverb, article, conjunction, noun, verb, preposition, pronoun, etc. • A closed class contains a relatively fixed set of words; new words are rarely introduced into the language. articles, conjunctions, pronouns, prepositions, etc. • An open class contains a constantly changing set of words; new words are often introduced into the language. adjectives, adverbs, nouns, verbs Examples of Closed Classes Articles: a, an, the Conjunctions: and, but, or, because, when, if, … Demonstratives: this, that, these, ... Prepositions: to, for, with, between, at, of, ... Pronouns: I, you, he, she, him, her, myself, … Quantifiers: some, every, most, any, both, ... Nouns Nouns: represent objects, places, concepts, events. dog, city, idea, marathon Count nouns: describe specific things or sets of things. dogs, cities, ideas, marathons Mass nouns: describe composites or substances. Verb agreement is singular. Ex: “ Dirt is … ” dirt, water, garbage, deer Articles Articles are problematic for natural language generation . Most singular noun phrases begin with an article. Ex: a newspaper, an apple, the movie But there are many exceptions, for example: The bowl was full of rice. *The bowl was full of apple. They go to college. *They go to university. She went on vacation. *She went on trip. He fell asleep in class. *He fell asleep in room. She sat up in bed. *She sat up in chair. I heard the news on television. *I heard the news on radio.

Modifiers Adjectives: words that attribute qualities to something.

Most Popular Documents for CS 5340 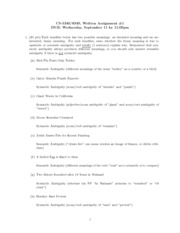 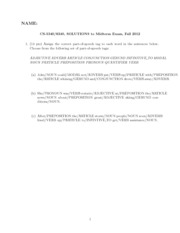 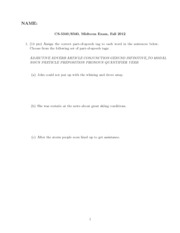 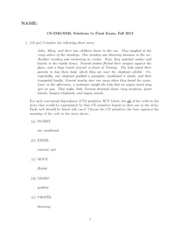 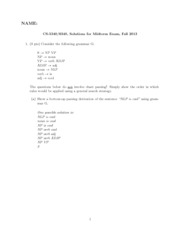 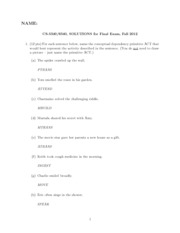