APA: US DROPPING OF TWO ATOMIC BOMBS ON JAPAN US dropping of two Atomic bombs on Japan The Hiroshima and Nagasaki bombings are some of the historic mid 20 th century events and up to date, they have remained to be the only events where nuclear weapons were used in war. The bombings led to devastating momentous and long lasting negative effects both on the people and the environment. Over time, there have been serious debates as to whether the US was justified to drop the two bombs in Japan and whether the Potsdam Declaration was intended to be acceptable without the use of nuclear weapons. The historical event. During the final stages of the World War II (WWII), United States of America dropped two atomic bombs on the Nagasaki and Hiroshima. Under the executive order of Harry Truman, the US president, the US dropped Little Boy, a uranium atomic bomb, on the city of Hiroshima, the 7 th largest city in Japan. This was on 6 th august, 1945. The uranium bomb was so powerful such that within minutes, half of Hiroshima city vanished. The city was unbelievably destroyed. Out of its 90,000 buildings, more than 60,000 of them were utterly demolished (Rezelman et al, 2000 and Adamsand Crawford 2000). Information from Harry S. Truman Library & Museum (1946) reveals that as brief as it was, the flash of the explosion emitted intense radiant heat travelling through the air at the speed of light. The explosion was therefore followed instantly by flash burns. The US estimates that 60,000-70,000 people were killed and 140,000 others were injured (Rezelman et al, 2000). On 9 th august, 1945, three days after the bombing of Hiroshima, Fat Man, next nuclear weapon was dropped in Nagasaki, over the north factory. It was exploded at a height of 1,800 feet above the

city in order to attain a maximum blast effect. At its blast, buildings collapsed, there was shortages of electric systems and as a result of this, there were a wave of secondary fires which contributed to massive deaths. Most of the casualties to the inhabitants of the city were caused by primary heat waves. Many others were burnt and killed when their homes, offices or other buildings they were in burst into flames. flying debris also contributed to more injuries. 39% of the buildings standing were destroyed. Air was being drawn back to the middle of the burning area, a firestorm of winds immediately followed and because of this, trees were uprooted. The bomb killed 42, 000 people and injured over 40,000 more (Rezelman et al, 2000 and Adams and Crawford 2000). The Radiation Effects Research Foundation (2000) estimates that within the 2-4 months after the bombings, 90-000-166,000 people in Hiroshima were killed by acute effects of the blasts while 60,000-80,000 were killed in Nagasaki but roughly half of the death in each case occurred on the first day. During the two explosions, the causes of deaths were generally the same. Thousands died instantly from flash or flame burns, falling debris and other secondary causes and over the following months, others died from acute radiation sickness and other conditions arising from compounded effects of injuries and sicknesses. Most of the people who 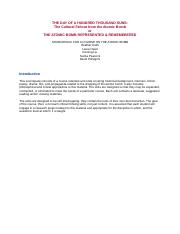 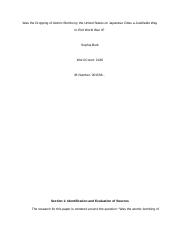 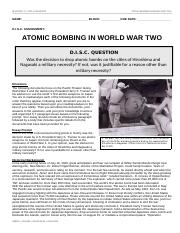 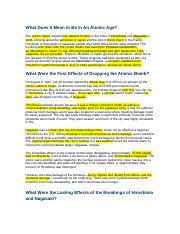 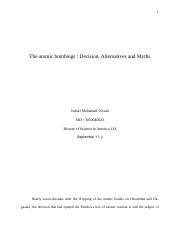 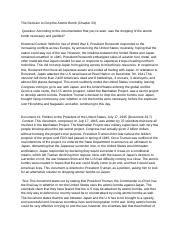