EXERCISES: SET BE3-1BMaria Diaz has prepared the following list of statements about the time period assumption.1. Adjusting entries are necessary only if a company has made accounting errors.2. The IRS requires companies to file annual tax returns.3. One transaction can affect several accounting periods.4. Accounting time periods cannot be shorter than a quarter.5. A time period lasting less than one year is called an interim period.6. All fiscal years are calendar years, but not all calendar years are fiscal years.InstructionsIdentify each statement as true or false. If false, indicate how to correct the statement.E3-2BBurris Industries collected $140,000 from customers in 2017. Of the amount col-lected, $30,000 was for services performed in 2013. In addition, Burris performed services worth $47,000 in 2017, which will not be collected until 2018.Burris Industries also paid $110,000 for expenses in 2014. Of the amount paid, $30,000 was for expenses incurred on account in 2016. In addition, Burris incurred $44,000 of ex-penses in 2017, which will not be paid until 2018.Instructions(a) Compute 2014 cash-basis net income.(b) Compute 2014 accrual-basis net income.E3-3BEdelman Corporation encounters the following situations:1. Edelman purchased $1,400 of supplies in 2017; at year-end, $500 of supplies remain unused.2. Edelman incurs utility expense which is not yet paid in cash or recorded.3. Edelman’s employees worked 3 days in 2017, but will not be paid until 2018.4. Edelman performs services for customers but has not yet received cash or recorded the transaction.5. Edelman received cash for future services to be performed in 2018.6. Edelman paid $8,000 rent on October 1 for the 4 months starting October 1.7. Edelman performed consulting services for a client in December 2017. On December 31, it billed the client $3,300.8. Edelman paid cash for an expense and recorded an asset until the item was used up.9. Edelman collects $2,000 from a customer for services to be perfomed next year.10. Edelman purchased equipment on January 1, 2017; the equipment will be used for 5 years.11. Edelman borrowed $20,000 on October 1, 2017, signing a 10% one-year note payable.InstructionsIdentify what type of adjusting entry (prepaid expense, unearned revenue, accrued ex-pense, accrued revenue) is needed in each situation, at December 31, 2017.E3-4BShellhammer Company has the following balances in selected accounts on Decem-ber 31, 2017.Explain the time period assumption.(LO 1)Compute cash and accrual accounting income.(LO 1)Identify the type of adjusting entry needed.(LO 1, 2, 3)Prepare adjusting entries from selected data.(LO 2, 3)CHAPTER 3Accounts Receivable $ -0-Accumulated Depreciation—Equipment -0-Equipment 7,000Interest Payable -0-Notes Payable 25,000Prepaid Insurance 2,520Salaries and Wages Payable -0-Supplies 2,650Unearned Service Revenue 50,000All the accounts have normal balances. The information below has been gathered at December 31, 2017. 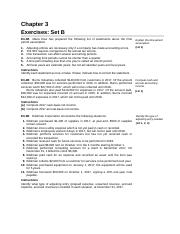 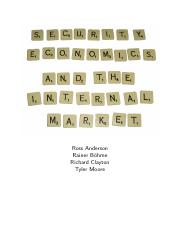 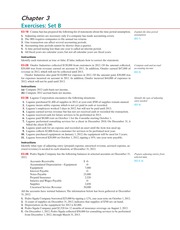 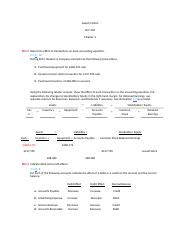 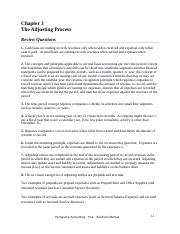 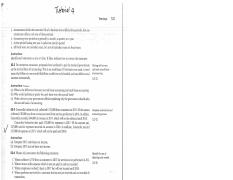