DE RHAM COHOMOLOGY JOSHUA P. EGGER Abstract. De Rahm Cohomology is a powerful tool which allows one to extract purely topo- logical information about a manifold, essentially by doing algebra on its cotangent bundle. A particularly useful method of computing de Rham cohomology groups was discovered by Austrian mathematicians Mayer and Vietoris, and involves partitioning a manifold into subspaces, ideally ones whose cohomology groups are already known. In this paper, we briefly cover the prerequi- site homological algebra, introduce de Rham cohomology, then proceed to prove the invariance of cohomology under smooth homotopy which allows for a simple proof of the Poincaré lemma. We then develop the Mayer Vietoris sequence, perform a few computations, including a simple homological proof of the Brouwer fixed-point theorem, then conclude with an introduction to co- homology with compact support, followed by a discussion and proof of a version of the Poincaré Duality Theorem, which links the dual notions of homology and cohomology. Contents 1. Preliminaries 1 2. Chain Complexes and De Rahm Cohomology 2 3. Invariance of de Rham Cohomology under Smooth Homotopy 3 4. The Mayer-Vietoris Sequence 4 5. Applications 6 6. Poincaré Duality 8 References 14 1. Preliminaries We will list several basic properties of, but will mostly assume familiarity with the basic properties of manifolds, exterior algebra, and differential forms. Recall that a n -dimensional manifold M consists of a set M and a differential structure which allows us to do calculus on the manifold. This structure consists of an atlas A = ( U α , ϕ α ) α ∈ I , where I is some indexing set, and each ϕ α : U α → ϕ α ( U α ) ∈ R n , which is called a chart , maps the set U α ⊆ M diffeomorphically to the parameter domain ϕ α ( U α ) in Euclidean n -space. Given a manifold M with cotangent space T * M (the dual space to the tangent space TM ), a differential k -form is an element of the k -fold exterior power Λ k T * M , a graded algebra. If we have coordinates x 1 , ..., x n for the chart ( U α , ϕ α ) and x ∈ U α , the space Λ k T * M , which we shall henceforth refer to as Ω k ( M ) , is spanned by the elements dx i 1 ∧ · · · ∧ dx i k , where the i k are increasing. Recall that a differential k form ω ∈ Ω k ( M ) is said to be closed if dω = 0 , and exact if there exists a ( k - 1) -form α ∈ Ω k - 1 ( M ) such that dα = ω . Since d ( dω ) = d 2 ω = 0 for any ω ∈ Ω k ( M ) , it is clear that every exact form is closed. The converse, however, is not true. Not all closed forms are exact, the standard example being the 1 -form ω = dθ = - ydx + xdy x 2 + y 2 defined on R 2 \{ 0 } , where θ is the polar angle. The form ω = dθ has no global primitive on R 2 \ { 0 } , yet it does have a local primitive in any convex neighborhood. This is typical of closed forms which fail to be exact: every closed form on a manifold can be made exact under certain circumstances. In this case, the non-convexity of the punctured plane R 2 \ { 0 } prevents dθ from being exact. This notion is made precise by the 1

2 J. EGGER Poincaré Lemma, which states that all closed forms on a contractible manifold are exact. 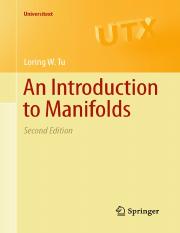 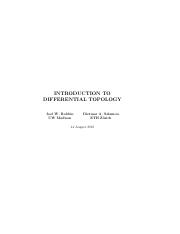 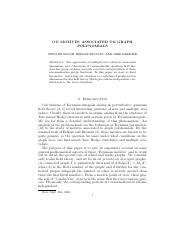 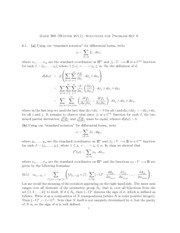 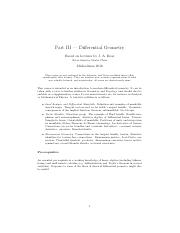