Page “I’ve Fallen Over and I Can’t Get Up” by Madern, Hood, Paul, & Stephens !" Ashley L. Madern, Michael D. Hood, Je rey C. Paul, Jr., and Philip J. Stephens Department of Biology, Villanova University, Villanova, PA NA TI ON AL C ENTER R FO R CA C SE SE S TUDY TEA CH IN I N G G IN IN S CI EN CE C Part I – Children Playing in the Heat e summer of 1985 turned out to be the hottest on record for Tulsa, Oklahoma, and that day in July was one of the hottest. Two boys were playing outside while their mothers were inside preparing lunch for their children. “ e boys have been outside for more than two hours, they must be hot and tired. Let’s get them inside and have them watch TV after lunch; they can go back outside when it cools o . John has been talking about putting in a pool; that will make these hot summers more bearable.” e women stopped talking when they heard someone tapping on the sliding glass door facing the back yard. “Mrs. Myron, Mrs. Myron, come quickly,” someone called out. “What’s wrong, Jack?” asked Mrs. Myron as she opened the sliding door. “Greg fell over and didn’t get up,” Jack said, as he and the two women ran over to a four-year-old boy lying next to the sand box. “We were building a big castle in the sand box,” Jack continued. “Greg wasn’t happy because one of the towers fell in. He stood and went to jump on it, but he just fell over. I thought he was just playing, but he didn’t get up.” e two women carried the limp boy into the house and lay him on the sofa. Mrs. Myron was placing a cool, wet cloth on her son’s forehead when his eyes opened. “What happened?” Greg asked. “You passed out, again,” replied his mother. “I noticed that you didn’t touch the lemonade we left you boys.” “Do you think we should take him to hospital?” asked Mrs. Rose, Jack’s mother. “I’m afraid this isn’t the rst time this has happened,” replied Mrs. Myron. She pinched the skin on the back of her son’s hand and noticed that it did not spring back. “I think he’s just dehydrated. He gets so immersed in what he’s doing that he forgets to drink. It’s my fault. It really is too hot, but he loves to play outside.” Greg started to get o the sofa, but quickly fell back. “Mom, I’m feeling dizzy and I’m really thirsty. Can I have a glass of water?” “Of course, my dear. I think you two will be staying inside this afternoon.” “But Mom…” “I need to have you close by so I can keep an eye on you. Here, I’ll turn on the TV.” Questions 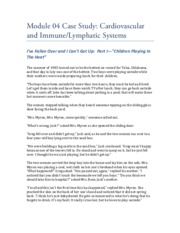 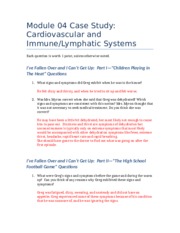 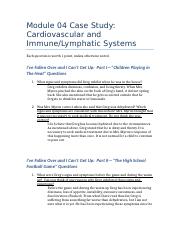 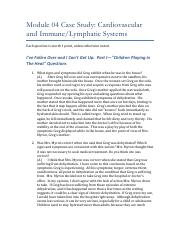 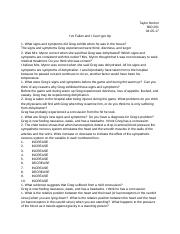 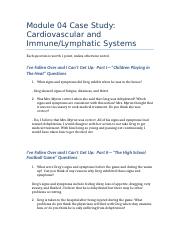