International Journal of Zoology Studies78 International Journal of Zoology Studies ISSN: 2455-7269 Impact Factor: RJIF 5.14 Volume 2; Issue 6; November 2017; Page No. 78-81 Heavy metal analysis in selected water bodies of Sivakasi town, Tamil Nadu during different seasons C Alagumurugan, Rajan MK Post-Graduate and Research, Department of Zoology, Ayya Nadar Janaki Ammal College (Autonomous), Sivakasi, Tamil Nadu, India Abstract The present study was undertaken in Periyar colony and Thiruthangal water bodies in Sivakasi town for analysis of seasonal variations in heavy metals such as lead (Pb), cadmium (Cd), silver (Ag) and copper (Cu). Heavy metal analysis was carried out for a period of two years from June 2014 to May 2016 in four seasons as pre-monsoon, monsoon, early post monsoon and late post monsoon. Concentration of heavy metals Pb, Cd, Ag and Cu were determined by continuous flame method using atomic absorption spectrophotometer. High level of Cd was reported in Thiruthangal water body (0.0220 ppm± 0.72) during monsoon season and during late post monsoon (0.2522 ppm ± 1.43) in Periyar colony. High level of Pb was reported during monsoon (0. 0510 ppm ± 0.93) and low during late post monsoon (0. 0089 ppm ± 0.90). High level of Cu was recorded during late post monsoon (0.0116 ppm ± 0.98) in Periyar colony and during pre-monsoon (0.0159 ppm ± 0.45) season in Thiruthangal water body. Our study revealed that, accumulation of heavy metals such as Cd, Ag, Pb and Cu showed slight variation between the years 2014-2015 and 2015-2016. However, concentrations of some metals are higher during summer season. Concentrations of most of heavy metals in water are observed during monsoon season and this may be mainly due to the addition of heavy metals by run off during monsoon season. Keywords: heavy metals; parameters; pollution; sivakasi; water bodies 1. Introduction Heavy metals are metallic elements which have high atomic weight and density much greater than water. There are more than 20 heavy metals which affects the environment. In which four heavy metals, lead (Pb), cadmium (Cd), mercury (Hg) and arsenic (As) are of particular concern to human health. Adsorption and accumulation of these elements depend on their concentration, physio-chemical properties of water, distribution in body and physiological effects of metals [1]. Metals like As, Cd, Pb and methylated mercury have been reported to have no known importance in human biochemistry and physiology, and consumption even at very low concentrations can be toxic. Toxicity of heavy metals cause death of various organisms or it shows effect on development, feeding, activity, reproduction and general physiology [2]. The physical and chemical forms of heavy metals in the fresh water ecosystem are governed by environmental variables such as temperature, salinity, pH, biological activities and metal properties [3]. Bio-accumulation of heavy metals by living organisms is often a good integrative indicator of exposure and has been extensively used to assess contamination levels of heavy metals in polluted ecosystems [4]. Even for those that have bioimportance, dietary intakes 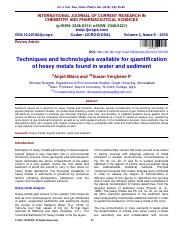 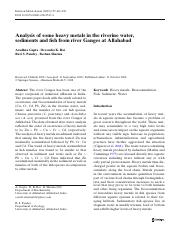 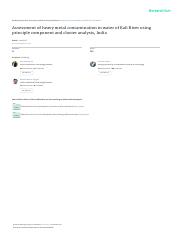 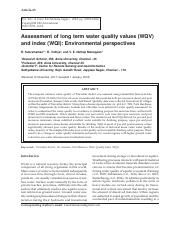 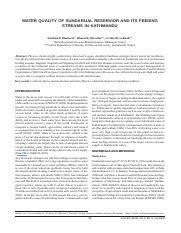