HARDY WEINBERG.doc - HARDY-WEINBERG AND EVOLUTION The...

HARDY-WEINBERG AND EVOLUTION The Hardy-Weinberg principle is straightforward: if p + q = 1, then p 2 + 2pq +q 2 = 1. Arithmetically, this is trivial. Biologically it is astonishingly profound. This is a lab exercise in which your lab class will become a population of fishes. In becoming this population, you will learn that by simple, straightforward exchange of gametes, several remarkable evolutionary processes can occur: genetic drift, mutation, natural selection, gene-flow, and nonrandom mating. You will even gain insights into the processes that can lead to speciation. Summary: The biological principle illustrated by the Hardy-Weinberg equation is this: If a population has only two alleles at a given locus, and their frequencies are known, we can call those frequencies p and q. Since there are only two alleles, it must be true that p + q=1. For example, let’s say we have a population of 100 diploid individuals. Among them they have 200 alleles at the locus of interest; 120 are of one form and 80 are of the other form. The frequency of the first allele form is 120/200 (p = 0.6), and the frequency of the second is 80/200 (q = 0.4). Note that it doesn’t really matter which allele gets described by p and which by q. However, a common convention is to give the p label to the frequency of the more common allele. In a diploid population, every individual has two copies of each gene (two alleles). Since the probability that an individual has one copy of the first allele is p, then the probability that it is homozygous for that allele is p 2 . This is just an illustration of the law of independent probabilities. The same argument can be used to describe the probability that an individual is homozygous for the second allele, q 2 , or in fact that the individual is heterozygous, 2pq. The point is this: if you know p and q, you can predict what the frequency of each genotype will be in the population using the law of independent probabilities. Predicting the future of populations is the brass ring of ecology and conservation biology, and in population genetics, we have captured that ring. Since there are only three possible genotypes, then the sum of those three frequencies must equal one. Thus we come by a biological argument to the same equation, p 2 + 2pq +q 2 = 1. Here a numerical example is very helpful. Say we have a population of 100 diploid individuals. Among them, there are 200 alleles of the gene we are interested in (because each individual has two copies). If we know that the first allele, let’s call it A, occurs with a frequency p = 0.6, and the second, a, with a frequency q = 0.4, then we can predict that in that population, 0.36 will have the genotype AA (0.6 2 ), 0.16 will be aa (0.4 2 ), 0.48 will be Aa (2 x 0.6 x 0.4). At this point, students usually yawn, bored stiff, knowing that this is ridiculously obvious. Unfortunately, it isn’t. If you go to that population of 100 individuals, and count the number of homozygotes of each kind and the number of heterozygotes, the proportions of each may not be the proportions predicted above. For example, a population with 60 AA and 40 aa individuals does not meet the predictions of Hardy-Weinberg.

Most Popular Documents for BIO 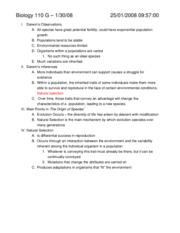 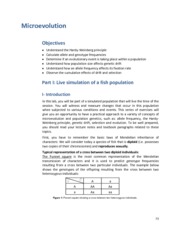 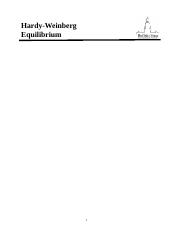 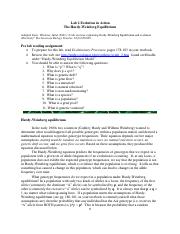 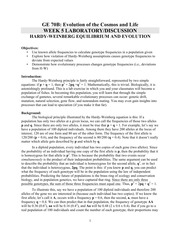