1/27/2018 Johns Hopkins Magazine -- April 2000 1/8 APRIL 2000 CONTENTS PIONEERS GUEST BOOK Note: There is another Johns Hopkins Magazine article about the enduring issues surrounding Henrietta Lacks in the Summer 2010 issue. Though Henrietta Lacks never traveled further than from Virginia to Baltimore, her cells are alive--and multiplying--in labs the world over. Opening photo: Youngest son David Lacks holds a photo of a portrait done of his parents, shortly before his mother died. Photo by Bill Denison APRIL 2000 Pioneers of Discovery · · · · · · · · · · · · Henrietta's Dance By Rebecca Skloot Not long before her death, Henrietta Lacks danced. As the film rolled, her long thin face teased the camera, ﬂashing a seductive grin as she moved, her eyes locked on the lens. She tilted her head back and raised her hands, waving them softly in the air before letting them fall to smooth her curlers. Then the film went blank. Henrietta danced in Turners Station, a small, segregated Baltimore community where she moved in 1943. She had come by train from a plantation town in Virginia, leaving her kin behind, most still picking tobacco long after freedom from slavery. As she sped toward Baltimore, at the age of 23, her husband, David Lacks, waited in their new brick house with a stove that burned gas instead of wood. Henrietta knew she was heading into a more modern world. What she didn't know was that less than a decade later, after giving birth to her fifth child, her womb would give rise to a new age in medicine. On February 1, 1951, under the cover of a solitary tree, David Lacks stared through the window of his parked car, watching the rain fall. He and his five children, three still in diapers, sat outside Hopkins Hospital, waiting for Henrietta. A few days earlier, she had found blood spotting her underwear. Now, Howard Jones, a Hopkins physician, found a smooth eggplant-hued tumor glistening under the light on Henrietta's cervix. He touched its surface, shocked by its supple texture, and Henrietta bled. Jones carefully cut a section of her quarter-sized tumor, sent it to the lab for a diagnosis, and sent Henrietta home with her family. Then came the news: the tumor was malignant.

1/27/2018 Johns Hopkins Magazine -- April 2000 2/8 Henrietta returned to Hopkins eight days later. While David and the children waited under the tree, physicians covered her cervix with radium in an attempt to kill the cancer. But before applying the first treatment, a young resident took one more sample. This one went to George Gey, head of tissue culture research at Hopkins. He and his wife, Margaret, had been searching for a tool for the study of cancer: a line of human cells that would live indefinitely outside the body. If they succeeded, they could observe and test human cells in ways they could never do in humans. 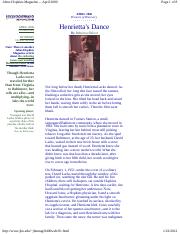 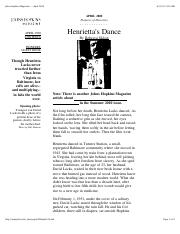 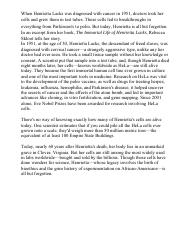 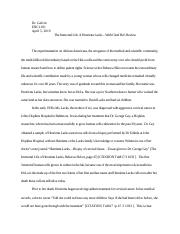 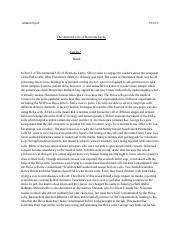