Running head: Knowledge of Students1Knowledge of Students Key AssessmentLatanya ReevesLagrange College, Summer 2018Part I
Knowledge of Students2Health (the ability to lead a long and healthy life)I have legitimate concerns when it comes to the ability to lead a long and healthy life. For most of my early life, I grew up in the south. Living in Charleston, South Carolina with my grandparents as primary caregivers, being healthy was not a major focus. My grandmother, who later died of cardiac arrest, was overweight, had high blood pressure, and would barely leave the house, let alone exercise. My grandfather smoked cigars, had high blood pressure and drank heavily. Most meals were prepared at home; however, they were still not healthy by comparison to today’s standards. I remember eating fried chicken prepared with lard/shortening. Most of the vegetables were canned versus fresh, with pork meat and lots of seasoning high in salt. There was rice, mac and cheese, or potatoes as sides. All meals were accompanied with bread. By today’s standards, some critics would say that was not healthy eating for a long life. Luckily, I wasn’t allergic to anything or I might have starved!Living in the south did make it easy for me to get exercise. I rode bikes, jumped rope, andplayed tag with friends or by myself for hours at a time. It wasn’t exercise, it was what we did for FUN! As for illnesses, I had a few colds, a case of bronchitis, and caught the chicken pox. I was considered “fat” by peers, but it wasn’t a concern for my doctors.A “healthier” way of eating was introduced to me during my late adolescent and high school years. My mother got on this “kick”, and started preparing foods with more vegetables, baking instead of frying, and replacing red meat with leaner proteins like chicken and turkey. We drank more water and fruit juice, used canola oil when necessary, and prepared meals with lower sodium seasonings. However, once I started college, had access to food through meals plans, and bought food on a college student’s budget, all that healthiness went to the wayside.
Knowledge of Students3As healthy as my mother tried to be by eating right, getting regular check-ups and walking for exercise, she was diagnosed with and died from complications of Non-Hodgkins Lymphoma. With the pre-disposed factors of cardio disease, high blood pressure and cancer, it would be wise for me to take whatever precautions I can towards leading a long and health life. Education (access to knowledge) School was always stressed as a priority in my life. Up until the age of 9, I lived with mygrandparents who may have had some high school education. My mother was an exceptional example of overcoming obstacles in pursuit of an education. As I previously stated, my mother had me at the age of 16. Contrary to most statistics, she continued her schooling, and graduated from high school. Living in New York, she managed to make a living and NEVER received any government assistance. Of my grandparent's four children, my mother is the only one that graduated from college. This was a big moment in my family's history because she was the first! 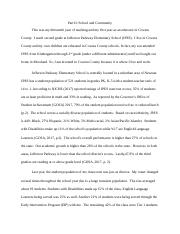 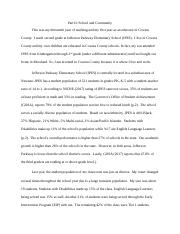 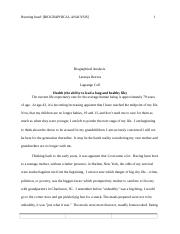 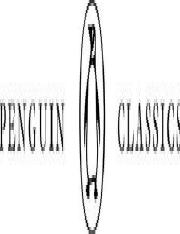 A Short Account of the Destruction of the Indies.pdf 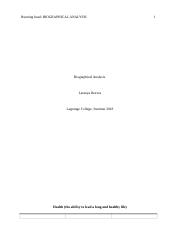 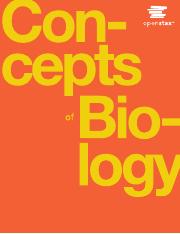