Chapter 27 - Empire and Expansion I. America Turns Outward 1. From the end of the Civil War to the 1880s, the United States was 2. very isolationist, but in the 1890s, due to rising exports, 3. manufacturing capability, power, and wealth, it began to expand onto 4. the world stage, using overseas markets to sell its goods. ○ The “yellow press” or “yellow journalism” ○ of Joseph Pulitzer and William Randolph Hearst also influenced overseas ○ expansion, as did missionaries inspired by Reverend Josiah ○ Strong’s Our Country: It’s Possible Future and Its Present ○ Crisis. Strong spoke for civilizing and Christianizing savages. ○ People were interpreting Darwin’s theory of ○ survival-of-the-fittest to mean that the United States was the fittest ○ and needed to take over other nations to improve them. ■ Such events already were happening, as Europeans had carved up Africa and China by this time. ■ In America, Captain Alfred Thayer Mahan’s 1890 book, The Influence of Sea Power Upon History, 1660-1783 , ■ argued that every successful world power once held a great navy. This ■ book helped start a naval race among the great powers and moved the ■ U.S. to naval supremacy. It motivated the U.S. to look to expanding ■ overseas. 5. James G. Blaine pushed his “Big Sister” policy, which 6. sought better relations with Latin America, and in 1889, he presided 7. over the first Pan-American Conference, held in Washington D.C. 8. However, in other diplomatic affairs, America and Germany almost 9. went to war over the Samoan Islands (over whom could build a naval base 10. there), while Italy and America almost fought due to the lynching of 11 11. Italians in New Orleans, and the U.S. and Chile almost went to war 12. after the deaths of two American sailors at Valparaiso in 1892. ○ The new aggressive mood was also shown by the U.S.—Canadian ○ argument over seal hunting near the Pribilof Islands off the coast of ○ Alaska. 13. An incident with Venezuela and Britain wound up strengthening the Monroe Doctrine. ○ British Guiana and Venezuela had been disputing their border for ○ many years, but when gold was discovered, the situation worsened. ○ Thus, the U.S., under President Grover Cleveland, sent a note ○ written by Secretary of State Richard Olney to Britain informing them ○ that the British actions were trespassing the Monroe Doctrine and that ○ the U.S. controlled things in the Americas. ○ The British replied by stating that the affair was none of the U.S's business. ○ Cleveland angrily replied by appropriating a committee to devise a

○ new boundary and if Great Britain would not accept it, then the U.S. ○ implied it would fight for it. ○ Britain didn’t want to fight because of the damage to its ○ merchant trade that could result, the Dutch Boers of South Africa were ○ about to go to war and Germany’s Kaiser Wilhem was beginning to ○ challenge Britain's power. 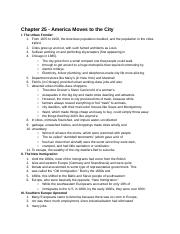 Chapter 25 - America Moves to the City 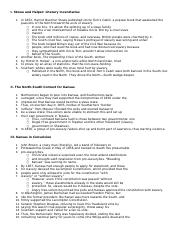 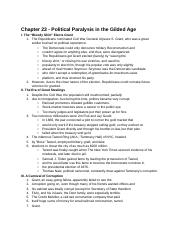 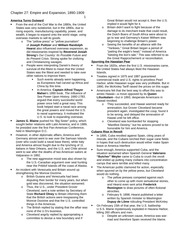 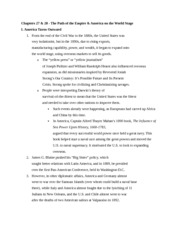 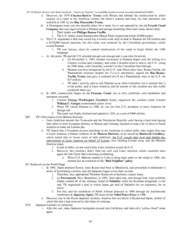