1 Short Terms: Beringia: 18,000-15,000 BCE, theory that people first came to America from Siberia through a land bridge, Clovis culture Mexica: indigenous people of the Valley of Mexico, known today as the rulers of the Aztec Empire War of the Roses: 1455-1487, after England is defeated in the 100 Years War, a lot of tension, two families fight for the throne- Plantagenet (red rose) and Yorks (white rose), Henry Tudor (Plantagenet) defeats the Yorks and marries Elizabeth of York, Tudor Dynasty rules until 1603 Reconquista: 711 C.E., religious war between Catholicism and Islam in Iberian Peninsula, Moors (Muslims) had occupied the majority of the Iberian Peninsula and Christians were working to recapture the land Doña Marina: 1519, female slave given as a peace offering to the Spanish conquistadors, became mistress, guide, and interpreter to Hernán Cortés during his conquest of Mexico, the success of his ventures was often directly attributable to her services St. Augustine: founded in 1565 by Spanish explorers, first successful Spanish settlement in Florida Joint-Stock Company: company created by investors to make money, ex: Virginia Company chartered by King James I to establish English colonies Black Legend: 1583, Spaniards slaughtered Indians, and imposed Catholic superstition on them Mercantilism: 1665, relevant in French America and Colonies, an economic system in which colonies existed mainly to provide raw materials and to serve as protected markets for finished goods

2 Tsenacommacah: the name given by the Powhatan people to their native homeland, English colonized Jamestown in 1607, but are unable to sustain themselves, so Powhatan incorporate them into Tsenacommacah, miscommunication about who has power, John Smith saved by Pocahontas Roanoke: 1585, 100 colonists set up Roanoke colony in Virginia, some inhabitants are sent back to England to write about Roanoke, when they return three years later everything is gone, CROATOAN Powhatan: inhabitants of Tsenacommacah, dealt with John Smith and their struggle for power control , Powhatan Confederacy ended the Virginia Company (attacked them and they were too far into debt to afford a war) House of Burgesses: 1619, the lower house of the colonial Virginia legislature, formed by the General Assembly and made the General Assembly bicameral, John Rolfe: early 1600’s early settler in Virginia, brought seeds for a new strain of tobacco, which got cultivated and exported to England, first cash crop grown in America, marries Pocahontas which stops Powhatan war Puritans: 1600’s England is religiously divided, want Anglican church to be purged of Catholicism, being socially isolate, puritans ask king to move to Netherlands and eventually to America, called pilgrims New Netherlands: founded 1609 on the Hudson River, promoted religious freedom and self- governance to attract colonists Mayflower Compact: 1620, the first agreement for self-government to be created and enforced in America, enforced by the Puritans 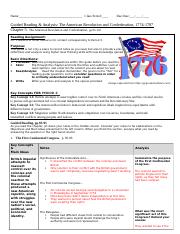 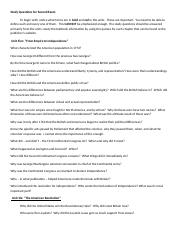 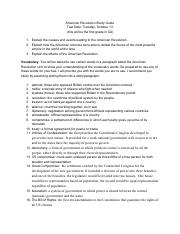 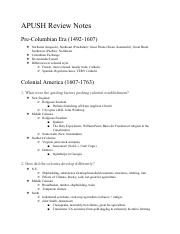 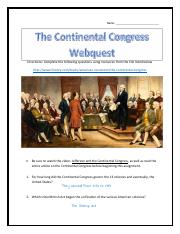 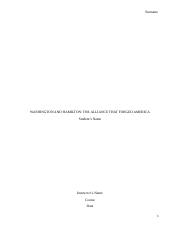 Order-516604 Topic-Find the thesis of the book,Washington and Hamilton The Alliance That Forged Amer