Geography Fair Final Report Sydney Adams, Ellie Nelson Culture Portugal is a very close-knit, free-spirited country with some of the longest lived traditions of all Europe. Portugal is located directly to the west of Spain in Europe. It is a part of the Iberian Peninsula. Portugal sits right in the Atlantic Ocean. Despite its size, it has a population of over 10 million people. Portugal has a total area of 92,090 square kilometers. The typical weather is that of the Maritime Climate; Cold and rainy on the north coast and hot and humid on the southern side. Its capital city is Lisbon, which is located on the west side of the country, almost directly on the coast. Its national language is Portuguese, and their currency is Euros. Many locals use the railway system for transportation. The general atmosphere of portugal and everything it has to offer is truly one to see, and should definitely make it on everyone’s bucket list. Portuguese culture is deeply rooted in its past. Much of it’s traditions and customs can be traced back generations, and its cuisine is no exception. Portuguese cuisine is heavily influenced by its location. Due to being located on the coast, seafood is very often featured in Portuguese dishes. According to Portuguese Food; Influencing Americans , Portugal has the fourth highest consumption of seafood per person out of all countries in the world. Some of the most popular types of seafood include cod, sardines, shrimp, octopus, crab and squid. For those who are not very fond of seafood, many dishes include animal meats aswell, including beef, chicken, sausages and pork. These meats can often be found in various stews, bowls and soups, and are typically combined with different beans, rices and vegetables. Cheese is also a huge industry in Portugal. Cheese in features in a multitude of dishes, as well as sandwiches and soups. Their cheeses are made of either cow, goat, or sheep milk and enjoyed in spreads, hard slices or cottage cheese style. Cheese is also a popular snack, along with fruit. Their climate allows for great harvests of fruit year-round. Starting in the summer, strawberries, peaches and summer cherries flourish, followed by grape, apple, pear, plum and fig season in the later months. For those with a sweet tooth, various desserts and pastries are also enjoyed frequently with meals. These pastries are often served with fresh fruit, honey, or chocolate. Portugal takes pride in its love for sweets. A variety of pastries and baked 2

Geography Fair Final Report Sydney Adams, Ellie Nelson goods are enjoyed everyday by residents and can be found in one of the many Paderias , or bakeries, in Portugal. As for beverages, wine is by far the most popular drink in Portugal. They have managed to build up a pretty strong reputation for their wine, and Portugal continues to be on top of the wine industry. 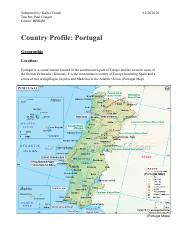 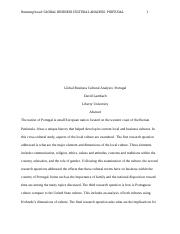 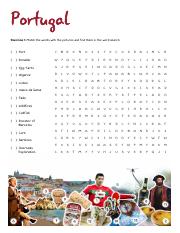 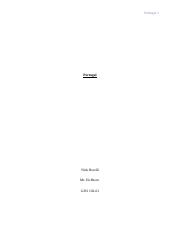 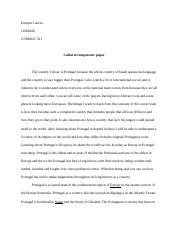