tgb-notes.docx - A Tree Grows in Brooklyn Book Notes A Tree...

Contents This table of contents needs to be updated 2

Author/Context Author/Context Betty Smith (1896-1972) Betty Smith was born Elizabeth Wehmer on December 15, 1896, the exact same birth date five years earlier than her fictional heroine of A Tree Grows in Brooklyn , Francie Nolan. Smith grew up in the poor section of Williamsburg, Brooklyn as the daughter of German immigrants. She left school at age 14 with an eighth grade education to work in factories. She married George H.E. Smith and followed him to the Midwest where he pursued law at the University of Michigan. She raised two daughters, Mary and Nancy, before she completed her education. She eventually studied at the University of Michigan where she pursued journalism, drama, writing, and literature. She excelled in this area, winning several awards, including the prestigious Avery Hopkins Award for work in drama. She also attended Yale Drama School for playwriting. Smith wrote features for several newspapers and read plays for theater projects while she acted in summer stock productions. She divorced Smith in 1938 and married fellow journalist/writer Joe Jones of the Chapel Hill Weekly in 1943. The year 1943 was not only romantically promising with her new marriage, but also professionally rewarding. Her first novel, A Tree Grows in Brooklyn , was published to garner critical acclaim and best-seller status. The book is semi- autobiographical and encapsulates the world of Brooklyn with all of its intricacies. Smith's themes mainly cover hope and poverty and track the lives of individual people struggling with both. Although known mainly for her phenomenal success with A Tree Grows in Brooklyn , Smith also penned three novels, Tomorrow Will Be Better (1947), Maggie-Now (1958), and Joy in the Morning (1963). They did not live up to the acclaim of her first novel and are often criticized as falling short of her first success. She is known for Brooklyn by the critics: "Here is a fist novel of uncommon skill; an almost uncontrollable vitality and zest for life, the work of a fresh, original and highly gifted talent... A Tree Grows in Brooklyn is a warm, sunny, engaging book as well as a grim one." Despite her single-book success, Smith has garnered a long career as a writer and dramatist. She has written several one-act and full-length plays for which she has won both the Rockefeller Fellowship and the Dramatist Guild Fellowship. Bibliography Gunton, Sharon, ed. Contemporary Literary Criticism . Volume 19. Detroit, Gale Research Company, 1981. 3

Learn more about The Comedy of Errors and A Tree Grows in Brooklyn with Course Hero's FREE study guides and infographics! 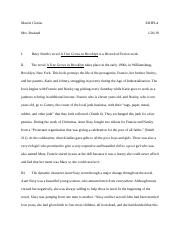 A Tree Grown in Brooklyn.docx 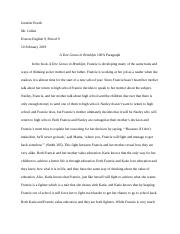 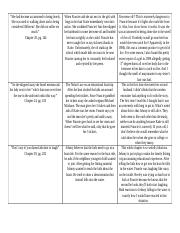 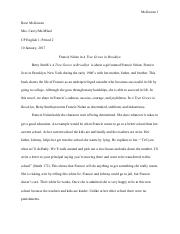 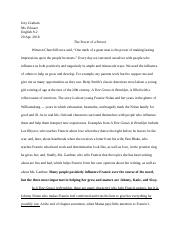 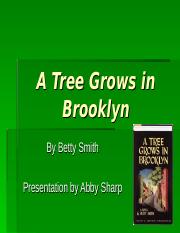