A COLORIMETRIC DETERMINATION OF ASPIRIN INCOMMERCIAL PREPARATIONS ADDITIONAL READING The concepts in this experiment are also discussed in sections 4.4 and 7.2 of Principles of Chemistry – AMolecular Approach, by Tro. Also, students are strongly encouraged to review the background information forthe Beer’s Law experiment that was done in CHEM 1033 (Gen Chem I lab). This information is included at theend of this document. ABSTRACT This experiment is divided into two parts. In Part A, a known sample of acetylsalicylic acid, commonly known asaspirin, was treated with sodium hydroxide to form a known concentration of salicylate ion. You will reactsalicylate ion with the iron(III) cation to form a brightly colored solution (the color is due to the salicylato iron(III)complex ion that will be discussed in the pre-lab lecture). You will prepare various known concentrations of thiscolored solution and measure the absorbance of each one. Using Excel, you will make a Beer’s Law plot (alsoknow as a calibration curve) of absorbance (y-axis) vs. concentration (x-axis), and use Excel to fit a straight lineto the data and calculate the equation of the line. In Part B you will react an aspirin tablet with sodiumhydroxide and then with iron(III), as in Part A, and measure the absorbance of the solution. Using your Beer’sLaw plot from Part A, you will be able calculate the concentration of the salicylate ion and the mass of theacetylsalicylic acid in the aspirin tablet, and compare this mass will that printed on the bottle of aspirin tablets. BACKGROUND When a beam of light passes through a transparent medium (in this experiment a solution), its energy orintensity is reduced by several factors. Among these are 3 that are characteristic of the medium (solution). Theyare summarized in an expression known as Beer’s Law: log ⎛ │⎝I I0 ⎞ │⎠= ε bc where I0 is the initial intensity of the light, I is the intensity after passing through the medium, ε is an absorption coefficient, commonly called the molar absorptivity (and also the extinction coefficient), that is characteristic of the absorbing species in the medium, b is the pathlength of the light beam in the medium in centimeters (and equal to the width of the cuvette used in this experiment), and c is the concentration of the absorbing species in mol/L. The ratio I/I0 is also equal to the percentage transmittance, %T, divided by 100, i.e., %T/100, while the log of 100/%T is equal to the absorbance, A. Thus: log ⎛ ││⎝I0 I ⎞ ││⎠= log ⎛ │⎝100 %T ⎞ │⎠log ⎛ │⎝100 %T ⎞ │⎠= A A = %log2 - ( )T In terms of absorbance, Beer’s Law is simply: A = εbc. Both the absorbance and the percentage transmittance are dimensionless (unitless), hence ε has units of L/(mol.cm). 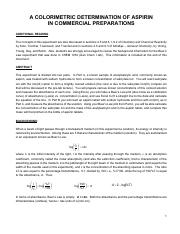 Expt 1 - A Colorimetric Determination of Aspirin_2019.pdf 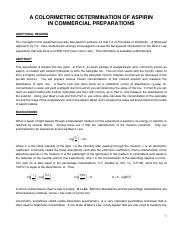 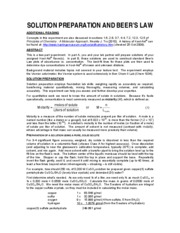 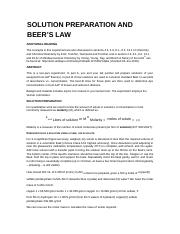 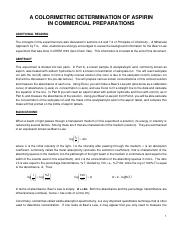 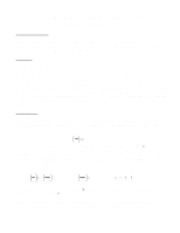