Sookmyung Women's University
BUSINESS A
BUSINESS A 101
Coca_Cola_A_Global_Brand_s_Experience_in China.pdf - A Global Brand’s Experience in China past decisions and current problems facing the world’s

Always Coca-Cola – 1993 Since 2000, The Coca-Cola Company has reigned Interbrand’s Best Global Brands ranking, to be surpassed only in 2013 by Apple and Google. With more than 500 brands consumed at a rate of more than 1.8 billion servings a day, Coca-Cola Co. is the worlds largest beverage company, operating in more than 200 countries (CCS, 2013). Founded in Atlanta in 1886, their ‘ Ice Cold Sunshine’ carbonated drink has reached all corners of the globe, making it a truly globally recognised brand. It is thus unsurprising that almost 60 percent of the Company’s revenue is generated from international markets. Coca-Cola has always pursued a global expansion strategy, building and then leveraging its strong brand throughout the world, in fact, one of its core missions is ‘To refresh the world… ’. Their symbolic 'I’d Like to Buy the World a Coke' ad, form the 1970s, depicts young people from all nations, dressed in traditional costumes, singing harmoniously on a hilltop. This iconic commercial, one of the milestones towards building Coca-Cola’s global brand image, has a clear underlying message, sustaining the firm’s approach to global diversity; Coca-Cola brings people together, despite their differences, culture, or nationality (Hysomn, 2011). Coke Is It! – 1982 One of the dominant strengths of the cola giant is its modus operandi and ideology towards internationalisation; operating on a global scale whilst maintaining a local attitude. Coca-Cola enjoys being the largest beverage distributor world-wide, operated by The Coca Cola System, which includes the mother company and more than 250 bottling partners worldwide (CCS, 2013). The company holds responsibility for global consumer brand marketing initiatives and manufactures and sells concentrates to bottling operations, ordinarily locally owned and not controlled by Coca-Cola Co., which are authorised to manufacture, package, merchandise and distribute the final good (CCS, 2013). Local focus is thus achieved via localised strategies developed by the bottling partners, in agreement with their partnership with Coca-Cola. Thanks to the high flexibility and adaptability of The Coca Cola System, the bottling partners are able to engage in local sourcing, thus having positive spillover effect on local economies. Following its approach to internationalisation, one can characterise Coca-Cola as a transnational organising, applying the Integration/Responsiveness-Framework shown in Figure 1. Such firms are a hybrid between global and multinational firms; they are able of achieving both the benefits of global integration, such as economies of scale, whilst adapting to local needs and establishing independently owned foreign subsidiaries (Morschett et al., 2009). This model fits former chief marketing officer of The Coca-Cola Co., Sergio Zyman, who has identified that in 2

Most Popular Documents for BUSINESS A 101 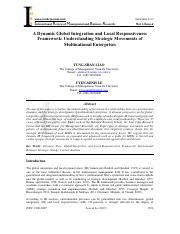 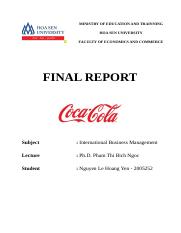 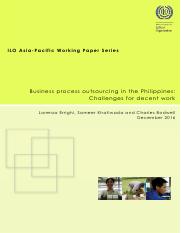 Business process outsourcing in the Philippines challenge for decent work.pdf 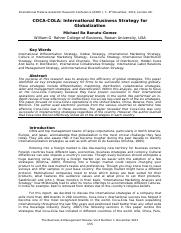 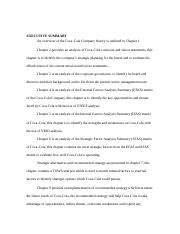