University of Texas, Arlington
BOB
BOB 123
Constellations Write-Up.pdf - LAB 1 CONSTELLATIONS AND COORDINATES OBJECTIVE This lab will utilize the Round House planetarium to give a tour of some of

L AB 1 C ONSTELLATIONS AND C OORDINATES O BJECTIVE This lab will utilize the Round House planetarium to give a tour of some of the constellations of the night sky, along with an introduction to the celestial coordinate system, the grid system that astronomers use to pinpoint the positions of objects in the night sky. I NTRODUCTION Cultures throughout the world, stretching far back into antiquity, have looked up in wonder of the night sky. As far back as 17,000 years ago, cave dwellers in Lascaux (modern day Dordogne, France) were etching and painting recognizable star formations on cave walls, including M45, the compact, bright Pleiades cluster in the modern constellation Taurus. It ’ s hard to know if drawing Orion and Taurus was the intention of the cave painters but the evidence is compelling that they had deep interest in the natural world around them, with the changing sky above certainly a source of wonder. At a loss for how to adequately explain the night sky’s motions and origin, ancient skywatchers believed the sky to be the realm of the gods, perfect and unchanging. There is even evidence that tribal humans in Germany 33,000 years ago were carving constellations and primitive day-count calendars into chunks of wood to be carried around. The Bronze Age Babylonians were pioneers of ancient astronomy. Not only did they establish measurement systems for angles and positions in the sky (using a counting system based on 6 and 60 for some reason, giving us 60 seconds per minute and 360° in a full circle) , they were also heavily invested in astrology, the study of stars’ influence on human behavior and destiny. This idea, later, would influence the idea of the horoscopes and zodiac constellations embraced by the ancient Greeks. Many of the well-known constellations derive from the heritage of Greek astronomy, with 48 of the 88 constellations codified by astronomer Claudius Ptolemy in the second century. Constellations originally were created in the imaginations of ancient people as ways of both identifying positions in the sky as well as honoring gods, goddesses, and heroes of mythology. The system which remains with us today is the Greek constellation scheme, with such names as Orion (the hunter), Ursa Major (the big bear), Cassiopeia (the North African queen), and Boӧtes (the herdsman), pulled right from the stories of ancient Greek heroes and deities. The eighty-eight modern constellations that cover the entire sky generally follow the layout of the ancient constellations, but with definitively defined borders separating one constellation from another. Many of the bright, main stars of constellations were named by Arab astrono mers and bear names of Arabic origin, such as Rigel (“the foot” of Orion), Dubhe (“the bear” of Ursa Major), and Caph (“the hand” of Cassiopeia).

Most Popular Documents from University of Texas, Arlington 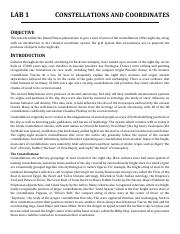 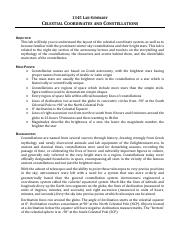 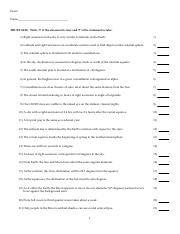 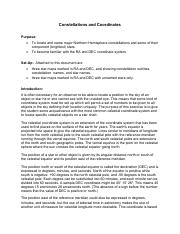 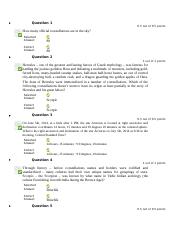 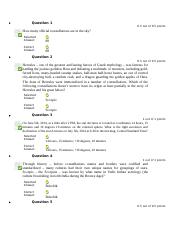