Week 4 Notes September 29, 2015 Lecture Notes ● Stressmann, Strasser, Streicher, Goebbels, Himmler, Hugenberg, Darre, Stanlhelm, Bruning Kleinarbeit ● Men who believed they had permanently life-time tenure, who’s identity bound up in being a servant of the state, now were unemployed ● White collar workers who thought they were important lost their jobs ● Mid-twenties, although economy recovering, it covered over a lot of unemployment among white collar workers and covered the failure of a lot of small businesses (1919-1924 military disbanded and hired as employees of small businesses and local stores) and masked inflation economy (rampant borrowing without worries--> opened small stores, kiosks, etc.) ● 1924 UNEMPLOYED b/c of stabilization efforts ● Farmers and peasants had to pay higher taxes after they sold their crops--> very unhappy ● All things considered, stabilization was no doubt successful in solving the problems for the economy--> all financial experts internationally agreed this was the only right thing to do--> stabilized the economy in 6 months!! (At what social cost?) o At what political cost? Harsh stabilization (not inflation) would have a devastating effect on the stability of German politics, ironically enough whose systems would come to the fore during the golden twenties ● Unrest in Germany seemed to be over--> American investors saw Germany as an investment opportunity ● Sense among people who understood finances--> if short-term loans withdrawn, Germany would be in trouble o Stressmann: “We are living on a volcano.” ● 1926 Germany admitted to League of Nations, 1928 Kellogg-Briand Non-Aggression Pact o Germany was following this policy of fulfillment and it seemed to be paying off ● “If one scratches beneath the surface of this stability and looks at the elections of 1928 (high watermark of stability in Germany), there are subtle manifestations of momentous changes in the German party structure.” ● 1924: Special Interests (7.8%), Conservatives (20.5%), Liberals (16.4%), Nazis (3%) ● 1928: Special Interests (14%), Conservatives (14.2%), Liberals (13.6%), Nazis (2.6%) ● 1930: Special Interests (14.4%), Conservatives (7%), Liberals (8.4%), Nazis (18.3%) ● Made mistake of typical Weimar party, “went into the government” ha-ha ● Special Interests were bound together by specific ideological content ● People voting for special interest parties were unhappy with traditional choices and wacky parties, so they voted for the special interests--> when viewed individually, were not noticeable but together forced a major realignment of middle class political allegiances o The stunning break through of the Nazis in 1928, viewed in this light, is not so surprising ● Anti-big business aspects of the parties program, Nazis would woo workers away from other parties ● January 1925 Hitler released from Jail and he learned several lessons from Beer Hall Putsch o 1) Attempting to overthrow government by force had been a terrible mistake and a frontal assault

Most Popular Documents for HIST 430 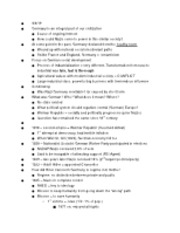 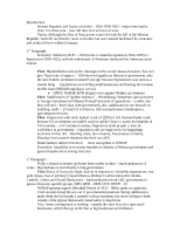 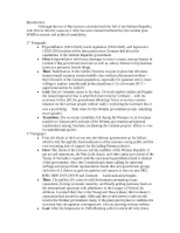 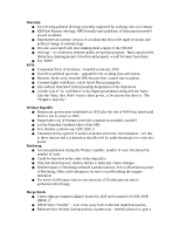 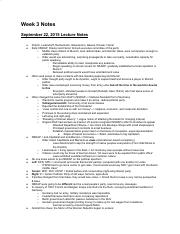 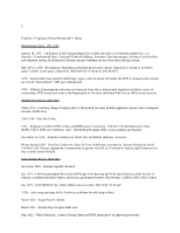