Oxford University
PHILOSOPHY
PHILOSOPHY 100
Papal Psalms Handout.doc - PAPAL CATECHESIS on the PSALMS of the LITURGY OF THE HOURS The Psalter as Prayer Vespers Benedictus Magnificat Psalm 16[15

P APAL C ATECHESIS on the P SALMS of the L ITURGY O F T HE H OURS The Psalter as Prayer ; Vespers ; Benedictus ; Magnificat ; Psalm 16[15] Psalter is ideal source of Christian prayer JOHN PAUL II GENERAL AUDIENCE Wednesday 28 March 2001 1. In the Apostolic Letter Novo millennio ineunte I expressed the hope that the Church would become more and more distinguished in the “art of prayer”, learning it ever anew from the lips of the Divine Master (cf. n. 32). This effort must be expressed above all in the liturgy, the source and summit of ecclesial life. Consequently, it is important to devote greater pastoral care to promoting the Liturgy of the Hours as a prayer of the whole People of God (cf. ibid., n. 34). If, in fact, priests and religious have a precise mandate to celebrate it, it is also warmly recommended to lay people. This was the aim of my venerable Predecessor Paul VI, a little over 30 years ago, with the Constitution Laudis canticum in which he determined the current form of this prayer, hoping that the Psalms and Canticles, the essential structure of the Liturgy of the Hours, would be understood “with new appreciation by the People of God” ( AAS 63 [1971], 532). It is an encouraging fact that many lay people in parishes and ecclesial associations have learned to appreciate it. Nevertheless, it remains a prayer that presupposes an appropriate catechetical and biblical formation, if it is to be fully savoured. To this end, we begin today a series of catecheses on the Psalms and Canticles found in the morning prayer of Lauds. In this way I would like to encourage and help everyone to pray with the same words that Jesus used, words that for thousands of years have been part of the prayer of Israel and the Church. 2. We could use various approaches to understanding the Psalms. The first would consist in presenting their literary structure, their authors, their formation, the contexts in which they were composed. It would also be fruitful to read them in a way that emphasizes their poetic character, which sometimes reaches the highest levels of lyrical insight and symbolic expression. It would be no less interesting to go over the Psalms and consider the various sentiments of the human heart expressed in them: joy, gratitude, thanksgiving, love, tenderness, enthusiasm, but also intense suffering, complaint, pleas for help and for justice, which sometimes lead to anger and imprecation. In the Psalms, the human being fully discovers himself. Our reading will aim above all at bringing out the religious meaning of the Psalms, showing how they can be used in the prayer of Christ’s disciples, although they were written many centuries ago for Hebrew believers. In this task we will turn for help to the results of exegesis, but together we will learn from Tradition and will listen above all to the Fathers of the Church. 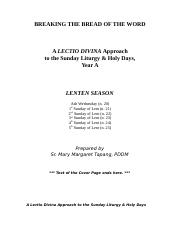