Cordova 2 Aristotle also known as the most influential thinker in world history, is the father of modern logic, the inventor of signs of biology, and the founder of ethnical reasoning. Aristotle was born in 384 B.C.E in the Macedonian town of Stagira on the north coast of the Aegean Sea. His father, Nicomachus was a court physician for the King of Macedonian, Amyntus II. 1 When Aristotle was young, his father Nicomachus and his mother Phaestis both passed away. After their deaths, Aristotle was raised by his older sister's husband Proxenus. When he was seventeen, Aristotle was sent to get a higher education, and then he enrolled into Plato's academy. In this time Plato was the most renowned thinker. Plato was taught by Socrates; the academy was built twenty years earlier. 2 Plato's academy was not like the formal schools. Plato's academy was where Plato would give his students problems for his students to participate in a discussion instead of listening to a lecture. Aristotle studied at the academy for twenty years, and then he moved up from being a student to being a teacher. Plato and Aristotle became close friends, even though they still had some differences. Plato died in 347 B.C.E Plato did not offer Aristotle the directorship of the academy. Plato gave it to his nephew Speusippus instead. 3 It was never clear why, but Aristotle soon left the academy after the new directorship. Aristotle had developed some friendships with some important people. One being Hermias he was the king of the Greek city Artenus. Hermias was also a former student of Plato's academy when Hermias got wind of Plato's death, he invited Aristotle to Artenus. Aristotle 1 Mortimer J. Adler, Aristotle for Everybody: Difficult Thought Made Easy (New York: Macmillan Publishing Co., Inc, 1997), x. 2 Biography.com Editors, “Aristotle Biography,” A&E Television Networks , April 2, 2014, October 16, 2019, 3 History.com Editors, “ HISTORY,” A&E Television Networks, November 9, 2009, October 15, 2019,

Cordova 3 settled in Assos, which faced the city of Lesbos. He spent three years there, established his own 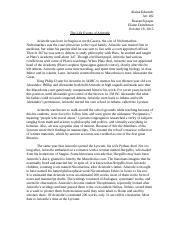 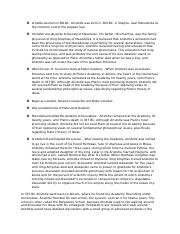 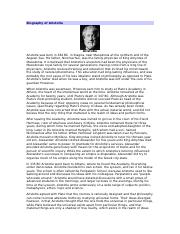 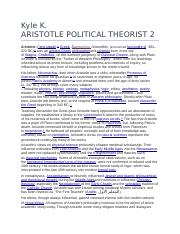 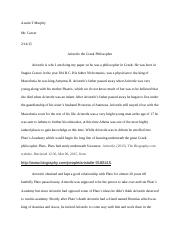 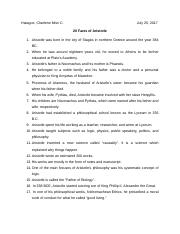