G.R. No. 128538 February 28, 2001 SCC CHEMICALS CORPORATION, petitioner, vs. THE HONORABLE COURT OF APPEALS, STATE INVESTMENT HOUSE, INC., DANILO ARRIETA and LEOPOLDO HALILI, respondent. QUISUMBING, J .: Before us is a petition for review, pursuant to Rule 45 of the Rules of Court, of the Decision of the Court of Appeals dated in November 12, 1996 in CA-G.R. CV No. 45742 entitled " State Investment House, Inc., v. Danilo Arrieta, et al., and SCC Chemical Corporation ." The questioned decision affirmed in toto the decision of the Regional Trial Court of Manila, Branch 33, dated March 22, 1993, in Civil Case NO. 84-25881, the dispositive portion of which reads: WHEREFORE, premises considered, judgment is hereby rendered in favor of the plaintiff and against the defendants ordering the latter to pay jointly and severally the plaintiff the following: a) To pay plaintiff State Investment House, Inc., the sum of P150,483.16 with interest thereon at 30% per annum reckond (sic) from April, 1984 until the whole amount is fully paid; b) To pay plaintiff an amount equivalent to 25% of the total amount due and demandable as attorney's fees and to pay the cost(s) of suit. SO ORDERED. 1 Equally challenged in this petition is the Resolution of the appellate court dated February 27, 1997, denying SCC Chemicals Corporation's motion for reconsideration. The background of this case, as culled from the decision of the Court of Appeals, is as follows: On December 13, 1983, SCC Chemicals Corporation (SCC for brevity) through its chairman, private respondent Danilo Arrieta and vice president, Pablo (Pablito) Bermundo, obtained a loan from State Investment House Inc., (hereinafter SIHI) in the amount of P129,824.48. The loan carried an annual interest rate of 30% plus penalty charges of 2% per month on the remaining balance of the principal upon non-payment on the due date- January 12, 1984. To secure the payment of the loan, Danilo Arrieta and private respondent Leopoldo Halili executed a Comprehensive Surety Agreement binding themselves jointly and severally to pay the obligation on the maturity date. SCC failed to pay the loan when it matured. SIHI then sent demand letters to SCC, Arrieta and Halili, but notwithstanding receipt thereof, no payment was made. On August 2, 1984, SIHI filed Civil Case No. 84- 25881 for a sum of money with a prayer for preliminary attachment against SCC, Arrieta, and Halili with the Regional Trial Court of Manila. In its answer, SCC asserted SIHI's lack of cause of action. Petitioner contended that the promissory note upon which SIHI anchored its cause of action was null, void, and of no binding effect for lack or failure of consideration. The case was then set for pre-trial. The parties were allowed to meet out-of-court in an effort to settle the dispute amicably. No settlement was reached, but the following stipulation of facts was agreed upon: 1. Parties agree that this Court has jurisdiction over the plaintiff and the defendant and that it has jurisdiction to try and decide this case on its merits and that plaintiff and the defendant have each the capacity to sue and to be sued in this present action; 2. Parties agree that plaintiff sent a demand

Most Popular Documents for LAW 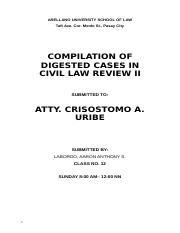 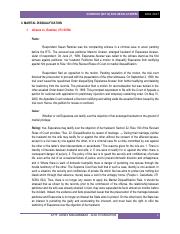 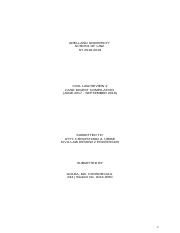 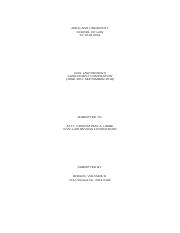 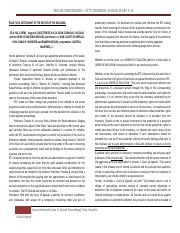