Activity8v2.docx - Samantha Stevenson There is no single...

Samantha Stevenson There is no single sensible answer to this question. It's impossible to count the number of words in a language, because it's so hard to decide what actually counts as a word. Is dog one word, or two (a noun meaning 'a kind of animal', and a verb meaning 'to follow persistently')? If we count it as two, then do we count inflections separately too (e.g. dogs = plural noun, dogs = present tense of the verb). Is dog-tired a word, or just two other words joined together? Is hot dog really two words, since it might also be written as hot-dog or even hotdog?? It's also difficult to decide what counts as 'English'. What about medical and scientific terms? Latin words used in law, French words used in cooking, German words used in academic writing, Japanese words used in martial arts? Do you count Scots dialect? Teenage slang? Abbreviations? The Second Edition of the 20-volume Oxford English Dictionary, published in 1989, contains full entries for 171,476 words in current use, and 47,156 obsolete words. To this may be added around 9,500 derivative words included as subentries. Over half of these words are nouns, about a quarter adjective, and about a seventh verbs; the rest is made up of exclamations, conjunctions, prepositions, suffixes, etc. And these figures don't take account of entries with senses for different word classes (such as noun and adjective).  This suggests that there are, at the very least, a quarter of a million distinct English words, excluding inflections, and words from technical and regional vocabulary not covered by the OED, or words not yet added to the published dictionary, of which perhaps 20 per cent are no longer in current use. If distinct senses were counted, the total would probably approach three quarters of a million.  Data that is (1) accurate and timely, (2) specific and organized for a purpose, (3) presented within a context that gives it meaning and relevance, and (4) can lead to an increase in understanding and decrease in uncertainty. Information is valuable because it can affect behaviour, a decision, or an outcome. For example, if a manager is told his/her company's net profit decreased in the past month, he/she may use this information as a reason to cut financial spending for the next month. A piece of information is considered valueless if, after receiving it, things remain unchanged. For a technical definition of information see information theory.  Information is the resolution of uncertainty; it is that which answers the question of "what an entity is" and is thus that which specifies the nature of that entity, as well as the essentiality of its properties. Information is associated with data and knowledge, as data is meaningful information and represents the values attributed to parameters, and knowledge signifies understanding of an abstract or concrete concept. The existence 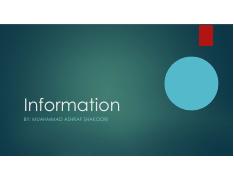 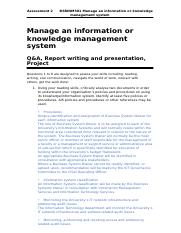 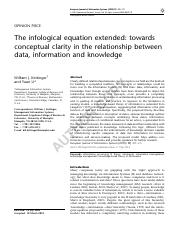 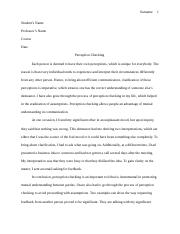 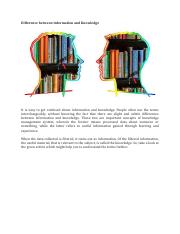 Difference between Information and Knowledge.pdf 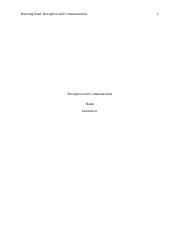