5 TE WHARIKI IN AOTEAROA NEW ZEALAND Witnessing and Resisting Neo-liberal and Neo-colonial Discourses in Early Childhood Education Marek Tesar This chapter argues that Aotearoa Ne_w Zealand is the place/space of neo- liberal and neo-colonial practices that shape childhoods, and analyzes the bicul- tural early childhood curriculun1 framework Te VVhdriki as an agent that both witnesses and resists these practices. Early years settings in Aotearoa New Zealand \Vork with and alongside Te Vflhdriki (Ministry of Education, 1. 996). They rese1nble and relive the country's histories, and various shifts fro1n Indigenous, through colonial, to free-market, contemporary neo-colonial, and neo-liberal realities. These shifts have not been smooth or easy progressions, but, as outlined in this chapter, they are con1plex stories of colonization and subju- gation, do1ninance, partnerships, failed promises, and resistance. I argue that Te VVhdriki has becon1e a witness and a resistant force in relation to the neo- liberal turn that has been influencing educational policy in Aoteaora Nevv Zealand since the 1980s (Codd, 2008). As a colonialist settler state, Aoteaora Ne\v Zealand has a very specific his- tory. T'e Tiriti o Waitangi (the Treaty ofWaitangi) was signed in 1840, and einbedded key principles of partnership, protection, and participation between Maori and the British Crown. Its principles have been disregarded in many colonizing practices, 1nostly by the white settlers, and the outcomes of coloni- zation are felt still today (Orange, 2011). They continue in different for1ns and shapes, such as in the rising non-Maori population, and in the disadvantage of Miiori and Pacifika chil~ren in education, health or other benchmarks of Western ineasurements. In early childhood education (ECE), the development of TC Whdriki as a bicultural curriculun1 fra1nevvork began in the early 1990s. This chapter argues that since this time the curriculum document has witnessed and created a framework for resistance to continuing colonizing and neo-liberal ideologies, which have brought a strong focus on econo1nic structures and Te Wh6riki in Aotearoa New Zealand 99 individual rights, hegemonizing and globalizing practices, and deregulations to Aoteaora New Zealand (Dale, 2008). Neo-liberalism and neo-colonization are "connected assemblages [that] aJlow us to rethink and open up early childhood research practices that attempt to pay atten- tion to colonial pastpresent" (Pacini-Ketchabaw, Nxumalo, and Rowan, p. 40). These assemblages play out through policies that recognize Aotearoa Nevv Zealand as a bicultural nation (Lourie, 2013), and as an increasingly multicultural society. Bicultural policies in ECE, including 'Fe JiVhdriki itself, exist in tension \vith multi- cultural, neo-liberal and neo-colonial realities. They are entangled in quite contra- dictory \Vays; for exa1nple, Te VV71driki maintains a strong focus on implementing the intentions of 'Te Tiriti o Waitangi through the protection of the Maori language and by promoting awareness and respect for cultural rituals, stories, and

Most Popular Documents for EDUCATION 877 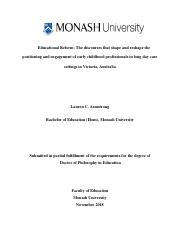 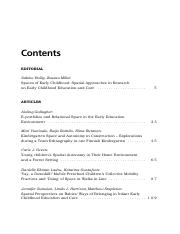 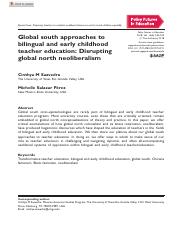