the proper pursuit of happiness.pdf -...

The Proper Pursuit of Happiness Daniel M. Haybron 1 Department of Philosophy Saint Louis University July 12, 2013 Abstract : What are the norms governing the pursuit of happiness? Presumably not just anything goes. But are the rules any more interesting than platitudes like “do what works, as long as you don’t hurt anyone”? Such questions have become especially salient in light of the development of positive psychology. Yet so far these matters have received relatively little attention, most of it from skeptics who doubt that the pursuit of happiness is an important, or even legitimate, enterprise. This paper ex- amines the normative issues in this realm, arguing that the pursuit of happiness is indeed a legitimate and important endeavor, contra recent criticisms by Aristotelian and other skeptics. Yet it is also sub- ject to strong, nonobvious normative constraints that extend well beyond those typically posited by commonsense and consequentialist thought. 1. Introduction One might think there is no “proper” to the pursuit of happiness, at least not in any inter- esting sense. Handle your responsibilities and don’t hurt anyone, but beyond such undemanding platitudes, do whatever works. I want to suggest that the rules of the game are rather more inter- esting than this large strain of commonsense would have it. In particular, I will argue that the pursuit of happiness is subject to strong, nonobvious constraints that go well beyond those posit- ed by standard forms of utilitarianism, among other modern ethical outlooks. 2 Yet contrary to various critics, notably those inspired by Aristotle and other ancient eudaimonists, the pursuit of happiness is a perfectly legitimate and indeed important enterprise. These questions are particu- larly salient in light of the recent rise of positive psychology, which offers a variety of techniques for happiness-promotion. The renewed attention to matters of happiness is a welcome develop- ment, but it also calls for a better understanding of the normative dimensions of the enterprise. Immediately the question arises what is meant by ‘happiness’, particularly since, on one understanding of the term, the pursuit of happiness would not be an especially controversial en- deavor. Eudaimonistic philosophers, for instance, take all of ethics to be founded on the pursuit of “happiness,” understood as eudaimonia. In this sense of the term, ‘happiness’ is an expression for a kind of value, prudential value, or more commonly, well-being or flourishing. (I will usual- ly use ‘well-being’ for this value.) It concerns the sort of life that benefits a person, and is not fundamentally a psychological kind—even if some commentators, like welfare hedonists, believe 1 Penultimate draft; forthcoming in Res Philosophica. For helpful feedback on earlier versions of this material, I wish to thank Anna Alexandrova, Felicia Huppert, Richard Stevens, an anonymous referee for this journal, and au-

Most Popular Documents for PSYCHOLOGY MISC 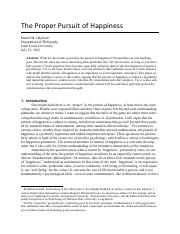 the proper pursuit of happiness.pdf 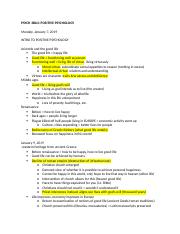 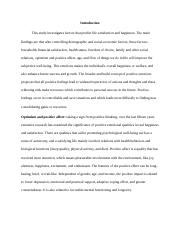 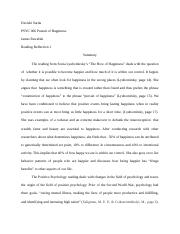 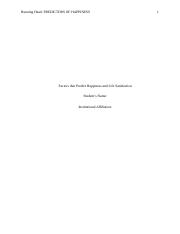 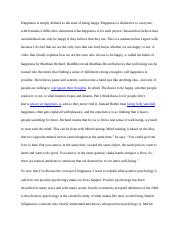 Happiness is simply defined as the state of being happy.docx