base paper.pdf - 4th Int’l Conf on Recent Advances in...

Face Recognition Using Interest Points and Ensemble of Classifiers A Vinay, Pratik Rajesh Sampat, Sagar V Belavadi, Pratik R, Nikitha Rao B S, Rahul Ragesh, K N Balasubramanya Murthy and S Natarajan Centre for Pattern Recognition and Machine Intelligence, PES University, Bangalore, Karnataka, India Abstract —In human beings, it is the responsibility of the temporal lobe of the brain for recognition of faces. Certain features of the face trigger the neurons of the temporal lobe which are then stored. These eventually lead to the identification of the face. In machine learning system, a huge dataset of images is used as a reference by the face recognition algorithms. The most prominent features are extracted from what is referred to as landmarks on the face and are analysed based on their relative position amongst other features. The main challenge in computer vision lies in the identification and extraction of these features which in turn assist in face recognition owing to the exponentially large degree of variability that can be seen in appearances. Speed and accuracy are some of the most prominent challenges for the same. We explore ELM critically and study its performance. Owing to its extremely fast learning, it finds potential in real-time applications. The goal of this paper is to evaluate the performance of the extreme learning machine algorithm for facial recognition when used as a standalone model as well as when it is used with an ensemble learner. We then conclude with a voting classifier which is responsible for the final predictions made. Various combinations of ensembles are explored to come up with the best performing model. Keywords— Face Recognition, Detector, Descriptor, SIFT, SURF, Feature Aggregation, Bag of Words, Extreme Learning Machine (ELM), Ensemble Learning, Voting Classifier I. I NTRODUCTION Facial Recognition [1] is a form of biometric technology that attempts to identify individuals through their facial fea- tures by making use of stochastic methods of computer vision over a digital image or a video frame. It continues to be an active field of research with the introduction of new techniques and growing commercial demand for accurate and reliable recognition techniques. Some of the prominent applications of face recognition lie under the domain of security involving face identification, wherein the system identifies the presence of an authorized person by recognising their face; surveillance by CCTV cameras to constantly seek and identify known criminals on the run and monitor without human intervention; image database investigation in airports, banks, casinos and almost all public spaces. With improving camera quality and increasing processing power, face recognition in smart phones and other hand held devices has been a recent addition under personal device identification. It is also used in mixed reality, human computer interaction, auto tagging, tracking attendance, fraud prevention in voting, multimedia and computer entertainment.

Most Popular Documents for COMP 112 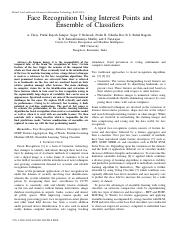 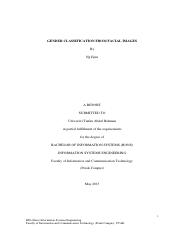 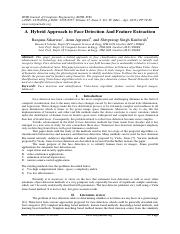 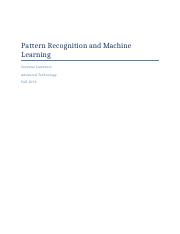 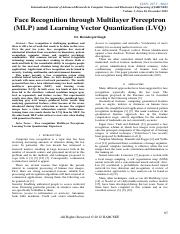 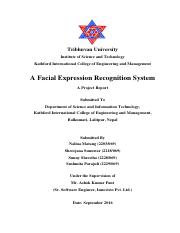