Separation and Identification of 4-Methylbenzophenone and Benzoic Acid Yvonne Grosso, Agnieszka Gimla, and Abdelaziz Ebead Department of Chemistry, York University, 4700 Keele St, Toronto, ON M3J 1P3, Canada ABSTRACT: This experiment practises the techniques involved in separating a mixture into its corresponding compounds. Thin layer chromatography separated the mixture into neutral and acidic components based on their affinities for aqueous and organic solvents. Analytical identification methods such as IR, NMR, C-NMR, and mass spectroscopy were then performed to characterize unknown products obtained. IR spectroscopy was used to determine the functional groups present while mass spectroscopy analyzes molecular weight of fragments. NMR and C-NMR were used to observe the behaviour of hydrogen present, ultimately to support the suggested structures from previous techniques, and these physical properties were compared to a library to identify the unknown. The neutral and acidic compounds of mixture M17 were determined to be 4-Methylbenzophenone and Benzoic acid with respective CAS numbers 134-84-9 and 65-85-0. KEYWORDS: TLC, IR, NMR, C-NMR, spectroscopy, separation, identification, 4-methylbenzophenone, benzoic acid ■ INTRODUCTION This experiment observed the techniques used for separating and identifying different components in a mixture. Firstly, the mixture is separated into its corresponding components by means of liquid-liquid extraction. The components are then isolated and purified to obtain a final solid product which subsequently undergo identification techniques such as melting point, TLC, IR, and NMR. Initially, the solid mixture containing the mixture of compounds needed to first be dissolved in a solvent in order to separate them based on their polarity. Liquid-liquid phase extraction is the method of choice to separate complexes based on their solubility in two different immiscible liquids, commonly distinguished as organic and aqueous, or, non-polar and polar [1] . Due to the characteristics of the compounds separated in this mixture, it is known that the neutral component would be soluble in the organic phase and the acidic or basic component would be soluble in the aqueous phase. Once the solubilized mixture had been shaken with these types of solutions simultaneously in a separatory funnel and allowed to separate into the two immiscible phases, the components could be separated to be further analyzed. Thin layer chromatography (TLC) is a commonly used technique used to separate components of a mixture based on their polarity. Each compound has different affinities for the mobile phase and stationary phase which affects the distance at which they travel from the initial line of application [2] . The TLC plate used in this experiment had an alumina stationary phase, and the mobile phase of choice was a 1:5 mixture of ethanol:hexane. Alumina is basic and allows for separation of smaller molecules. Using a capillary tube, a dilute solution of

Most Popular Documents for CHEM 3000 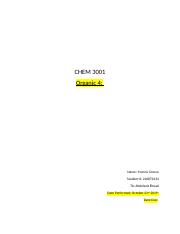 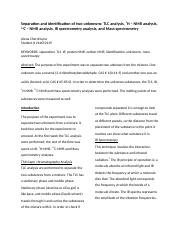 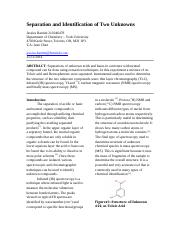 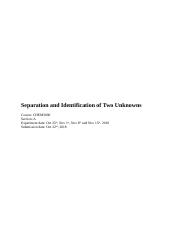 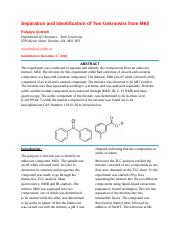 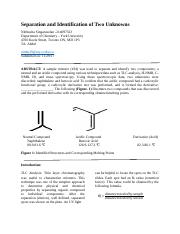 Seperation and Identification of Two Unknowns.docx