Australia (NSW) Inter-personal Violence; updated 8 Nov. 2009; 1854 in progress. INTER-PERSONAL VIOLENCE - NSW 1851-1853 MAITLAND MERCURY, 9/678, 01/01/1851 ASSAULT. - Yesterday BRIDGET HENRY appeared before the bench, charged by ELIZABETH RILEY with assaulting her, on the 21 st December. Mr. Nicholl appeared for the complainant. It appeared that on that day there was a general war of words between these parties and others living in adjoining tenements, in West Maitland, and Mrs. Henry deposed that Mrs. Riley spat in her face, and when the front door was shut on her, came and pushed it in. Two witnesses were called in defence, but they could only generally deny having seen the actions, not being able to state what they saw what passed in the front. The bench convicted Mrs. Henry, and fined her 10s. and costs, or fourteen days’ imprisonment. MAITLAND MERCURY, 9/682, 15/01/1851 ASSAULT. - Yesterday CHARLES SAUNDERS PITT appeared before the bench, charged with assaulting JOHN CHAPMAN . Mr. Turner appeared for the prosecution, and Mr. Ward for the defence. Chapman deposed that on Thursday last, as he was passing Mr. Pitt’s house, Mrs. PHILLIPS , who lives with Mr. Pitt, abused him from the upstairs window, but he passed on, saying nothing in reply; Chapman stopped at Mr. Whittaker’s, and Mr. Pitt’s apprentice, W.C. EVANS , came in there to tell Chapman Mr. Pitt wanted to see him; Chapman went into Mr. Pitt’s shop, when Mr. Pitt asked him what he meant by using just before such scurrilous language to Mrs. Phillips; Chapman denied that he had said anything to her, on which Mrs. Phillips, who was standing near, instantly knocked him down on his hands and knees by striking him a blow on the nose with a broom-handle; Mr. Pitt immediately seized Chapman by the back of the head, and held him down while Mrs. Phillips beat and kicked him; Chapman had been partially insensible for a minute or two, and recovered just as Evans was saying to Mrs. Phillips, “Go away now, and leave him alone;” Chapman then rose, and found his head and face covered with blood, from the wound on his nose, and blows or kicks on his mouth, and his head was still sore with the bruises he received; he remonstrated with Mr. Pitt, but he was ordered out of the shop, but he obtained permission from Mr. Pitt to wash his head and face from the blood before he went out. An old man named JAMES BRIERLY corroborated Chapman’s account as to his being sent for from Whittaker’s, and he saw Chapman, about five minutes after, at Mr. Pitt’s door, with his face all bloody. GEORGE IDEN , a cab- driver, chanced to stop just opposite the door to take in a parcel, and saw Chapman on his knees on the floor, and Mr. Pitt and a man standing by him, while a woman was leaving the shop; Iden had just previously noticed some noise in the shop and saw a broom handle flying across as he drove up. In defence it was stated by Mr. Ward that the injuries received by Chapman were greatly exaggerated, that he had brought them on himself by his insolent language, and that Mr. Pitt had committed no assault. He called WILLIAM CHARLES EVANS

Most Popular Documents for PSY 121 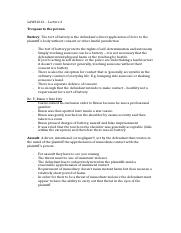 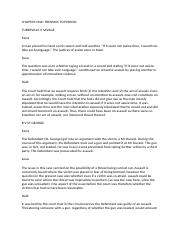 CHAPTER ONE- TRESPASS TO PERSON.docx 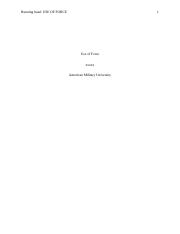 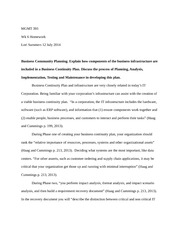 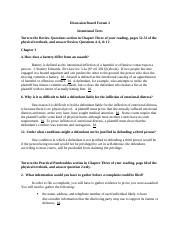 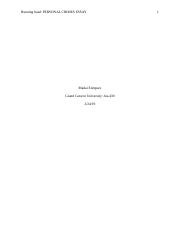