From The Hartford Institute for Geriatric Nursing, New York University Rory Meyers College of Nursing Best Practices in Nursing Care to Older Adults general assessment series Issue Number 17, Revised 2018 Editor-in-Chief: Sherry A. Greenberg, PhD, RN, GNP-BC Managing Editor: Robin Coyne, MSN, RN, AGACNP-BC New York University Rory Meyers College of Nursing Alcohol Use Screening and Assessment for Older Adults By: Madeline A. Naegle, PhD, APRN, BC, FAAN, New York University Rory Meyers College of Nursing WHY: Older adults are diagnosed with fewer alcohol use disorders (AUDs) than young and middle aged adults (Grant et al. 2015). The number of AUDs in older adults, however, are second only to prescription medication disorders. Importantly, harmful alcohol use increases the risk for non-communicable disease (WHO, 2017) and contributes to morbidity and mortality. Aging increases vulnerability to the effects of alcohol used alone and in combination with illicit drugs and medications. Alcohol use contributes to diabetes, cancer and cardiovascular disease. Risk further increases in the presence of co-morbid conditions. The National Institute of Alcohol Abuse and Alcoholism (NIAAA,2017), therefore, recommends that alcohol consumption for adults age 65 and older be limited to 1 standard drink (12 ounces of beer, 4-5 ounces of wine or 1 ½ ounces of distilled spirits) per day or 7 standard drinks per week and no more than 3 drinks per occasion. Lower limits or abstinence are recommended for those taking medications that interact with alcohol and conditions exacerbated by its use. In 2008, it was estimated that 40% of persons over 65 drank alcohol (NIAAA, 2017), a number which rose by 65% from 2002 to 2013. About 19% of older drinkers meet criteria for “at risk” drinking (alcohol consumption above NIAAA levels, likely to increase health risks). Additionally, 23% report binge drinking [4-5 drinks per occasion] (Grant et al., 2015). More than 50% of late middle-aged men and women (50-64), are drinking alcohol and 14% are drinking heavily. Many do not recognize related health risks of risky/harmful amounts of alcohol and do not reduce their drinking with age. These data portend growing numbers of alcohol related problems with an increase in the number of older adults (NIAAA, 2015). BEST TOOL: The U.S. Preventive Task Force recommends that all adults be screened for alcohol use and that “risky” drinkers be provided with counseling (USPTF, 2017). The first step is to ask “Do you drink alcohol?” and if so, “How much alcohol do you drink?”. If the patient reports regular alcohol consumption, The Short Michigan Alcoholism Screening Instrument–Geriatric Version (SMAST-G), should be used. It is a short-form alcohol screening instrument tailored to the needs of older adults. Two or more “yes” responses suggest an alcohol problem (Blow et al.,

Most Popular Documents for NURSING 102 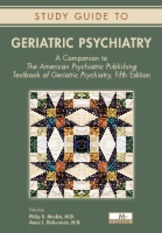 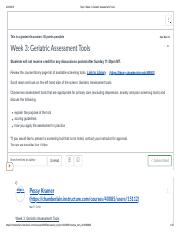 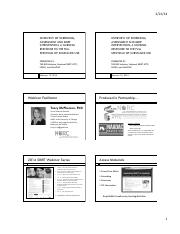 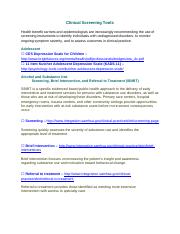 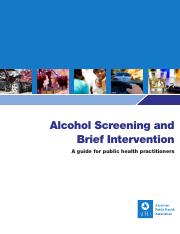 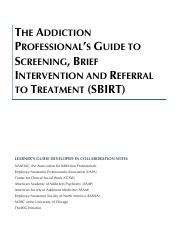