Harvard University
ENGLISH
ENGLISH 211
The Pearl.docx - The Pearl by John Steinbeck Summary synopsis The Pearl is a novella by American author John Steinbeck first published in 1947 It is the

The Pearl.docx - The Pearl by John Steinbeck Summary...

The Pearlby John SteinbeckSummary/ synopsisThe Pearlis a novellaby American author John Steinbeck, first published in 1947. It is the story of a pearl diver, Kino, and explores man’s nature as well as greed, defiance of societal norms, and evil.Steinbeck’s inspiration was a Mexican folk tale from La Paz, Baja California Sur, Mexico, which he had heard in a visit to the formerly pearl-rich region in 1940. In 1947, it was adapted into a Mexican film named La perlaand in 1987 into a cult Kannada movie Ondu Muttina Kathe. The story is one of Steinbeck’s most popular books and has been widely used in high school classes. The Pearlis sometimes considered a parable.SummarySettingThemesCharactersSummary /SynopsisThe Pearl, which takes place in La Paz, Mexico, begins with a description of the seemingly idyllic family life of Kino, his wife Juana and their infant son, Coyotito. Kino watches as Coyotito sleeps, butsees a scorpion crawl down the rope that holds the hanging box where Coyotito lies. Kino attempts to catch the scorpion, but Coyotito bumps the rope and the scorpion falls on him. Although Kino kills the scorpion, it still stings Coyotito. Juana and Kino, accompanied by their neighbors, go to see the local doctor, who refuses to treat Coyotito because Kino cannot pay.Kino and Juana leave the doctors and take Coyotito down near the sea, where Juana uses a seaweed poultice on Coyotito’s shoulder, which is now swollen. Kino dives for oysters from his canoe, attempting to find pearls. He finds a very large oyster which, when Kino opens it, yields an immense pearl, which Kino therefore dubs “The Pearl of the World”. Kino puts back his head and howls, causing the other pearl divers to look up and race toward Kino’s canoe.The news that Kino has found an immense pearl travels fast through La Paz. The doctor who refused to treat Coyotito decides to visit Kino. Kino’s neighbors begin to feel bitter toward him for his good fortune, but neither Kino nor Juana realize this feeling that they have engendered. Juan Tomas, the brother of Kino, asks him what he will do with his money, and he envisions getting married to Juana in a church and dressing Coyotito in a yachting cap and sailor suit. He claims that he will send Coyotito to school and buy a rifle for himself. The local priest visits and tells Kino to remember to give thanks and to pray for guidance. The doctor also visits, and although Coyotito seems to be healing, the doctor insists that Coyotito still faces danger and treats him. Kino tells the doctor that he will pay him once he sells his pearl, and the doctor attempts to discern where the pearl is located (Kino has buried it in the corner of his hut). That night, a thief attempts to break into Kino’s hut, but Kino drives him away. Juana tells Kino that the pearl will destroy them, but Kino insists that the pearl is their one chance and that tomorrow they will sell it.

Most Popular Documents for ENGLISH 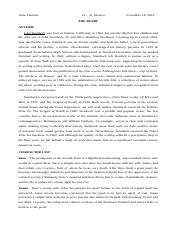 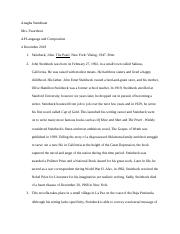 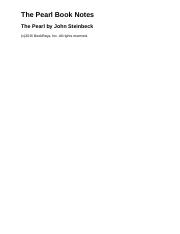 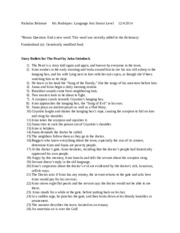 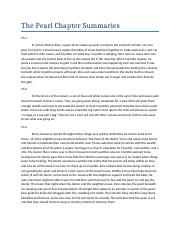 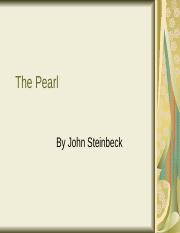