2 Introduction Not too long ago, PBS aired a documentary called Taken for a Ride . Early in the program, the narrator promised that the video would tell °the story about how things got the way they are. ± Between 1926 and 1936, they methodically destroyed the rails.² 1 The °they² in this story was General Motors, Standard Oil, Firestone Tire, and others. Although reviewers of Taken for a Ride referred to it as °a tragically important story² (James Kunstler) and °an important piece of American history² (Howard Zinn), no one claimed that the story it told about GM and the others was a story that had not been heard before. 2 Indeed, within a year of the film³s release, Jane Holtz Kay had published Asphalt Nation: How the Automobile Took over America and How We Can Take It Back, in which she pronounced Ford, GM, and Chrysler the °trio [that] drove the era of excess and consumerism.² 3 °Sold by General Motors salesmen whose maneuvers would earn opprobrium,² says Kay, °the motor bus spelled trouble for mass transit. In turn, the replacement of streetcars by buses and the need for more transfers made suburbanites buy more cars. In concert the truck, the bus, the multiplying motorcar, and cheap gas powered the auto age and undermined the monopoly of the rails.² 4 Taken for a Ride and Asphalt Nation are only the most recent voices to be raised in a decades-long protest against the automobile and its replacement of those proud and venerable conveyors of humanity: the electric railway streetcars. The villain in this tragedy, the one responsible for tearing asunder America³s railway tracks, is General Motors — General Motors and its accomplices, the oil, tire, and truck companies. Or, so the story goes. This is the Great American Conspiracy Myth, perpetuated year after year by storytellers and keepers of the public conscience. The storytellers include 1 Taken for a Ride , produced and directed by James Klein and Martha Olson, 52 min., Hohokus, NY: New Day Films, 1996. 2 For these and other reviews, see °New Day Films — Taken for a Ride,² webpage accessed on November 12, 1998 []. 3 Jane Holtz Kay, Asphalt Nation: How the Automobile Took over America and How We Can Take It Back (New York: Crown Publishers, 1997), p. 171. 4 Kay, p. 174.

3 politicians such as Robert and Edward Kennedy and San Francisco³s Mayor Joseph Alioto.

Most Popular Documents for GEOG 1012 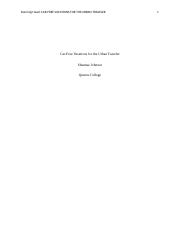 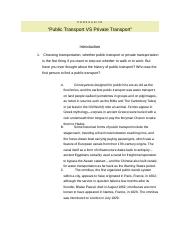 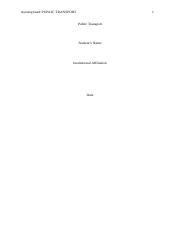 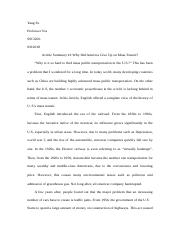 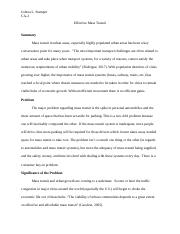