University of Maine, Presque Isle
HISTORY
HISTORY HTY 162
3 authors - Thomas McIntyre was born He is the author of several books and has written for Field Stream Sports Afield Grays Sporting Journal The Field

3 authors - Thomas McIntyre was born He is the author of...

Thomas McIntyre was born April 26 1952. He is the author of several books and has written for Field Stream, Sports Afield, Grays Sporting Journal, The Field, and most other major outdoor periodicals. He lives with his wife and son in Sheridan, Wyoming.The Drive To Camp by Thomas McIntyre“At the top of Mountain Pass, the glare in the rearview was like the afterglow of a device gone off in a long-overdue airburst above the coastal city. Then the interstate descended the Nevada side of the Clarks, leaving the Joshua trees behind; and the glare sank away, the highwayflattening out and running straight as a ballasted railroad across the dry lake bed, the desert air growing slaty with the dusk progressing toward night. At last light, in the next lane, was another pickup with a camper top or a load in the back lashed under a tarp. A Jeep CJ crammed with gear, jerry cans on the rear and a rifle rack mounted inside, came up and slung past. As the headlights came on, the traffic buttons glowing like cats' eyes, the lights of Las Vegas mounted ahead. It was like the Dust Bowl exodus in reverse, two generations later. The real Californians, the ones with roots going back before the war and the displaced sharecroppers' westward migrations, had their places to hunt in California. For the rest, in their tens of thousands, the way to the deer was a matter of returning the way they came, at least as far as Utah, Colorado, and Wyoming. And everyone went through Las Vegas. I was one of those Californians with multigenerational roots; but my people were not hunting people, and there was no ranch or mountain cabin. I heard the Colorado hunting stories, though, told by my father's friends, and I wanted to travel with them to hunt. This, then, was my first journey on the mule deer highway. Although I didn't know it, I would follow it almost without interruption for 15 years. By dawn we would be driving the trucks across the Utah-Colorado line. In Grand Junction, we'd take rooms, buy our licenses and supplies, sleep overnight, and the next morning be working our way upward through the axle-deep mud left in the shaded draws by early snows to churn out onto Skinner Ridge. Among the Gambel oaks and piñons and mountain mahogany was the campsite the older men had used throughout the '60s, and that was where we pitched the surplus pyramid tent for cooking and the wall tent for sleeping. Into the wall tent we would bring the folding bedsand sleeping bags. The tables, worn and whittled on, would be set up in the pyramid tent, and then the pots and pans, knives and forks, cups and plates, in the old U.S. mailbag, went in, along with the Coleman stove. Boxes of groceries followed, and it would already be time to start sorting through them for dinner: thick steaks, fried potatoes, salad with the inevitability of Italiandressing. The lanterns would be lit and we would eat. After the meal there would be the washing,

Most Popular Documents for HISTORY HTY 162 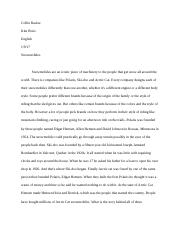 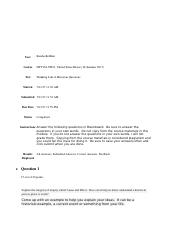 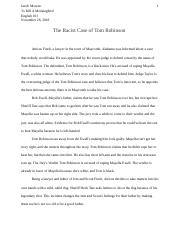 To Kill a Mockingbird Essay 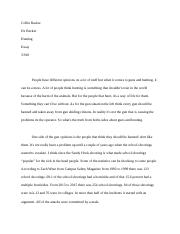 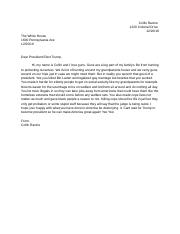 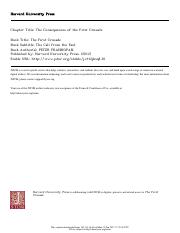