University of Texas
AST
AST 103
10.1.1.733.8716.pdf - RESEARCH AND PRACTICE IN HUMAN RESOURCE MANAGEMENT Poilpot-Rocaboy G(2006 Bullying in the Workplace A Proposed Model for

RESEARCH AND PRACTICE IN HUMAN RESOURCE MANAGEMENT Poilpot-Rocaboy, G. (2006). Bullying in the Workplace: A Proposed Model for Understanding the Psychological Harassment Process, Research and Practice in Human Resource Management , 14(2), 1-17. Bullying in the Workplace: A Proposed Model for Understanding the Psychological Harassment Process Gwénaëlle Poilpot-Rocaboy A BSTRACT Because different studies suggest that psychological harassment represents a great threat to most workers, it has received considerable and growing interest across the world and has emerged as a new field of study in Europe, Australia, South Africa and the U.S. In spite of these studies, bullying still appears as a complex phenomenon. This paper summarises the relevant literature and proposes a specific model of the psychological harassment process. This model presents psychological harassment as a four phase process to improve the understanding of this pernicious workplace phenomenon. As a very costly phenomenon, which harms the health of the victim and the competitiveness of the firm, the paper concludes that HR managers should combat psychological harassment in organisations. I NTRODUCTION Recent studies in many European countries suggest that the issues of violence and harassment in the workplace affect a substantial part of the workforce (Paoli & Merllié 2001, Di Martino, Hoel & Cooper 2003, Einarsen & Nielsen 2004). These studies also indicate that psychological violence and harassment, rather than physical violence, represents the greatest threat to most workers (Di Martino, et al. 2003). According to Paoli and Merllié (2001), around nine per cent of European workers had exposure to some psychological violence. When risk of intimidation and bullying was compared between EU countries, the highest risk was found for Finland (15 per cent), Netherlands (14 per cent) and the United Kingdom (14 per cent), whilst the lowest figures emerged for the Mediterranean countries (Italy, four per cent; Portugal, four per cent). Another study (Zapf, Einarsen, Hoel & Vartia 2003) estimates that between one and four per cent of employees in Europe may experience serious bullying, and between eight and 10 per cent occasional bullying. In France, 10 per cent of workers were found to be exposed to psychological harassment (Paoli & Merllié 2001). The French Association of Human Resource Managers study (Bouche 2001) shows that psychological harassment is an increasing phenomenon. A third of the 160 human resource (HR) managers consulted were confronted with cases of harassment in 2000. The number of complaints doubled, and after investigation, HR managers had three times more real cases of psychological harassment in 2000 (in comparison to 1999). In Australia, bullying in the workplace is widespread. The Beyond Bullying Association (see ), using international research, extrapolated that between 400,000 and two million Australians would be harassed at work in 2001, while between two point five and five million Australians will have experienced workplace harassment at some time during their careers. The Australian Council

Most Popular Documents for AST 103 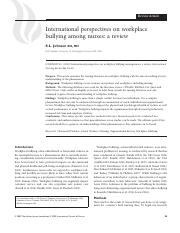 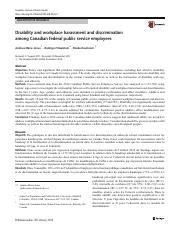 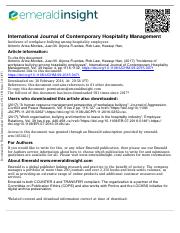 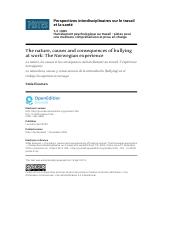 Einarsen S. - The nature, causes and consequences of bullying at work - The Norwegian experience.pdf 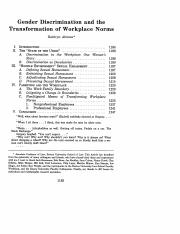 Gender Discrimination and the Transformation of Workplace Norms.pdf 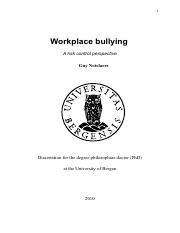