World Civilizations Mr. McGoldrick Questionnaire to Accompany the Viewing of Mussolini: Italy’s Nightmare 1) Benito Mussolini, we are told, believed himself to be a modern _______ _______. “A young Adolf Hitler idolized him, but when he marched behind Hitler into the Second World War, he destroyed his country, his dreams and himself.” 2) Benito was born on July 29, 1883 in a small town called Predappio, in the rustic countryside of northern Italy. The Mussolini family was slightly better-off than its neighbors, as Mussolini’s mother, _____, was a devoutly Catholic schoolteacher, who was allowed to live in the building that housed the school. 3) Benito’s father, Alessandro, was a lifelong socialist. He named the child after the ________ revolutionary, Benito Juarez, and later, his father took him to party meetings. 4) Although Benito yearned for his father’s love, his father generally rejected him, and the documentary suggests this might have been a cause of Benito’s becoming a _____ who delighted in “pinching people at church or throwing stones at them outside.” 5) At the age of eight, Benito was sent off to ______ ______ _____. He was a difficult child, and his father encouraged his son to disobey authority. 6) It was at this school that, two years later, at age ten, Benito organized his first rebellious protest, over the food served at the school. In 1894, he _____ a fellow student with a pocket knife. He was expelled. 7) His parents found another nearby school for him. In spite of several more suspensions and being a mediocre student. Benito received his ______ ______ in 1901. 8) There were many contradictions with Mussolini. He had gone over the Swiss border to escape ______ ______, a fact that is ironic considering that this was a behavior for which he would have people shot when he became dictator. 9) He joined a labor union, and acted on the radical left, advocating all-out revolution. He railed against the Church, the king, the government, everything his socialist father had taught him to despise. He was arrested by the Swiss authorities again and again. Benito protested against war, conscription, in favor of nationalizing property, and he even fought against ______, again ironically, as this would be a cornerstone of Fascism. 10) When he was 26, Benito decided to settle down with Rachele (pronounced Rachel-lee), the daughter of his ______’s ______. They defied Catholic teaching by moving in together rather than marrying. They would have five children. 11) Mussolini became a journalist, writing for a socialist newspaper, called Lotta di Classe . It was through this experience that Mussolini learned that people will believe almost anything, and they would soon forget your contradictions. “He was the first person to understand how to use the media in the broadest sense of the word to ______ the _______.” Mussolini would later become editor at 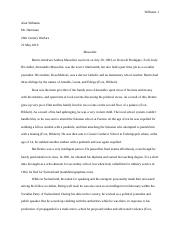 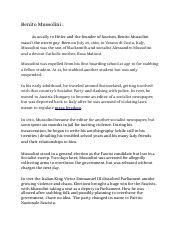 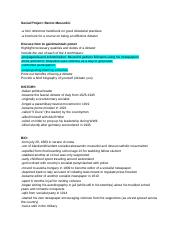 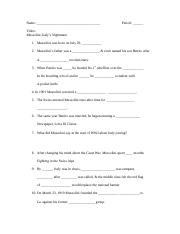 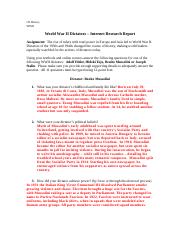 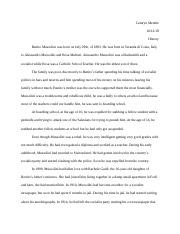