Harvard University
SCIENCE A
SCIENCE A 2
New Microsoft Word Document (2).docx - Abstract One of the problems facing the population worldwide is obesity Obesity is universal and affects all

New Microsoft Word Document (2).docx - Abstract One of the...

Abstract One of the problems facing the population worldwide is obesity. Obesity is universal and affects all people in different age groups and gender. The biggest problem with obesity is the cycle of diseases and health problems that obese people seem to suffer. An obese person seems to go through a roller coaster of diseases, depleting their energy, health, and psychological stability. If left unchecked, obesity can lead to server health problems such as cancer, Alzheimer's, and even death. One of the reasons for obesity is the lack of physical activities. With more people moving from home to office and back home by road, train transport, there is little room to exercise the body. Also, people don't participate in sports or even thinking of going to the gym. With such a lifestyle and consumption of fast foods, a large population is becoming obese. A change in lifestyle is needed to change to the problem of obesity in our nation. Key words: obesity, BMI, diseases, costs Obesity Obesity is a medical condition where a person has excess fat or weight, causing other medical conditions. A person's Body Mass Index (BMI), a ratio of a person's weight to height, is used to measure obesity (Mitchell, Catenacci, Wyatt, & Hill, 2012). A healthy person has a BMI range of between 18.5 to 24.9 kg/m2. An overweight person has a BMI of between 25 to 29.9kg/m2. Any person with a BMI above 29.9kg/m2 is considered obese (Mitchell et al., 2012). Consumption of fried potatoes, meat, and bread is associated with high BMI. Obesity is a global problem affecting individuals from most countries, with developed countries leading in obese people ("Economic costs," n.d.). A study of the population in the USA done in 2007/8 shows that 68% of the population was overweight and obese, with 34% having obesity (Mitchell et al., 2012). Data from around the world paints the same picture. In Canada, for instance, it is estimated that 25% of the adult population is suffering from obesity, with 14% of children and adolescents also being obese (Bancej et al., 2015). The prevalence of obesity is estimated to increase in Canada over the next two 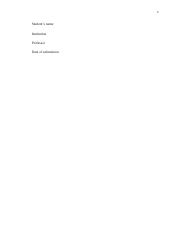 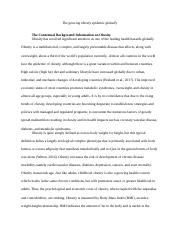 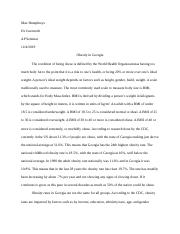 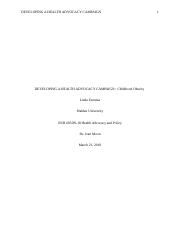 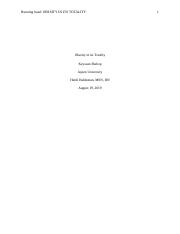 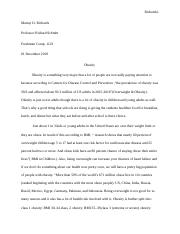