Project friday - Introduction Today I would like to talk...

Introduction Today, I would like to talk about one of the most important American novelists, about Edgar Lawrence Doctorow. The theme of my project is ‘American history and identity in the novels by E.L. Doctorow. Well, here you can see a plan of my presentation, so you can easily follow to me. To begin with, I would like to talk a little bit about author himself. Edgar Lawrence Doctorow (January 6, 1931 – July 21, 2015) was an American novelist, editor, and professor, best known internationally for his works of historical fiction. He has been described as one of the most important American novelists of the 20th century. He wrote twelve novels, three volumes of short fiction and a stage drama. They included the award-winning novels Ragtime (1975), Billy Bathgate (1989), and The March (2005). These, like many of his other works, placed fictional characters in recognizable historical contexts, with known historical figures, and often used different narrative styles. His stories were recognized for their originality and versatility, and Doctorow was praised for his audacity and imagination. The reader can not fail to notice E. Doctorow's interest in American history. In his novels ‘Ragtime’ , “The Book of Daniel” (1971), “Cloaca” (1994)), the writer rethinks the history of the United States, putting fictional and real characters in a context that everyone recognizes. Ragtime Now, I would like to move on to the most famous works of Doctorow, which perfectly reflect the issues of American history and identity. The first one is an award-winning novel ‘Ragtime’ This is a story, which explores race relations, repression, and industrialization in American . Ragtime published in 1975 is A unique adaptation of the historical narrative genre with a 1970s slant, the novel blends fictional and historical figures into a framework that revolves around events, characters, and ideas important in American history. Written almost thirty years ago, describing an age far removed from its own, E.L. Doctorow's novel Ragtime nevertheless explores issues of identity and ethnicity that still face America. It displays for the reader a rich and hypnotic portrayal of the soul of immigrant America, yet still fails to avoid ethnic bias in certain subtle ways. Whether the lapses into feelings of cultural superiority originate from the purposeful portrayal of the characters Doctorow created or without the author's conscious prior awareness, a careful reading of the text will reveal them. Ragtime is not only two decades of popular melodies and dances of America, but it is also the musical frame of a turbulent and complex era in the history of the United States. As I have mentioned earlier , ‘Ragtime’ also provides a historical overview of the main events happening in the United States from the Spanish-American War to the First World War; the giant growth of monopolies and the transformation of the United States into a leading imperialist power, the rise of the workers and the anti-monopoly movement, powerful strikes in Lawrence and Paterson York, the

Most Popular Documents for ENGLISH 18 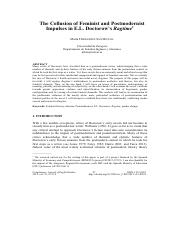 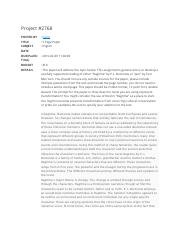 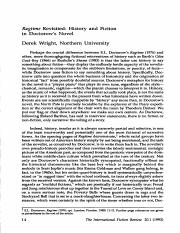 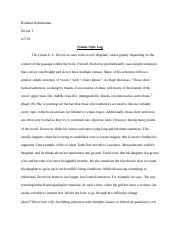 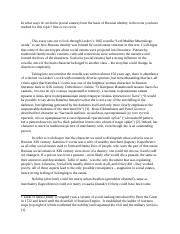 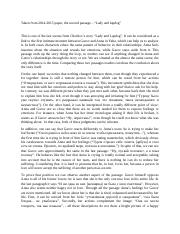