Caste System The Indian Caste System is historically one of the main dimensions where people in India are socially differentiated through class, religion, region, tribe, gender, and language. Although this or other forms of differentiation exist in all human societies, it becomes a problem when one or more of these dimensions overlap each other and become the sole basis of systematic ranking and unequal access to valued resources like wealth, income, power, and prestige. The Indian Caste System is considered a closed system of stratification, which means that a person’s social status is obligated to which caste they were born into. There are limits on interaction and behavior with people from another social status. This paper will be exploring the various aspects of the Indian caste system and its effects on India today. The origin of the Indian caste system has many theories behind it. Some of them are religious, while others are biological. The Brahmins were from his head, the Kshatriyas from his hands, the Vaishyas from his thighs, and the Shudras from his feet. For example, Brahmans, who were derived from the head of Purush, are considered the intelligent and most powerful varna because of their wisdom and education and are a representation of the brain. In the same way, Kshatriyas, considered the warrior caste, were created by arms, which represent strength. Another religious theory claims that the Varnas were created from the body organs of Brahma, who is the creator of the world in Hinduism (BBC News ). Historically, however, it is believed that the caste system began with the arrival of the Aryans in India around 1500 BC. The saying caste structure has been about since the 1840s, but we’ve represented employing caste since that 1500s. You might’ve seen about this status system in India, but there exist caste systems all around this globe, where people are born into the job, like owning a certain kind of job, and it’s hard to change. The Indo-Aryan culture are not the earliest, they do, however, contain the first

mention and continuous history of the factors that make up the caste system. The fluidity of the caste system was affected by the arrival of the British. The British brought with them their own traditional form of government, and as Christians, they did not have much sympathy for the Hindu institutions. As British civilization multiplied in India, however, it was fatal for the members of different castes, affecting the beliefs they have. The caste system is a classification of people into four hierarchically ranked castes called varnas. They are classified according to occupation and determine access to wealth, power, and privilege. The Brahmans, usually priests and scholars, are at the top. Next are the Kshatriyas, or political rulers and soldiers. They are followed by the Vaishyas or merchants, and the fourth are the Shudras, who are usually laborers, peasants, artisans, and servants. At the very bottom are those considered the untouchables. These individuals perform occupations that are considered 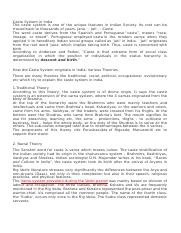 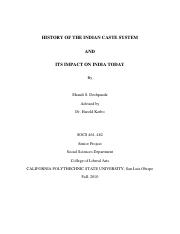 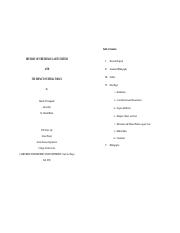 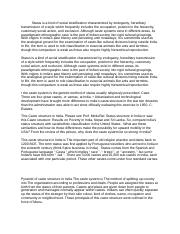 Status is a kind of social stratification characterized by endogamy.docx 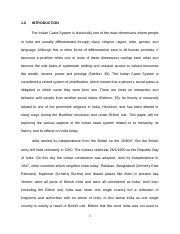