CHAPTER 2: LITERATURE REVIEW 2.1 INTRODUCTION The overall goals of this chapter were firstly to establish the significance concept or theoretical network for this research, then identify the previous research for sexual harrasement. In addition, research framework will be presented. The bulk of the chapter was on critically evaluating the different of concept or theory used in this field so as to identify the research framework. 2.2 CONCEPT AND THEORETICAL FRAMEWORK Theoretical Framework In this section, both (Akers’, 1985) adaptation of the Social Learning Theory and (Gottfredson and Hirschi’s, 1990) Self-Control Theory are discussed in relation to how the various theoretical components can be applied to both traditional juvenile delinquent behaviors and cybercrime inquiries. Although social learning theory and self-control theory are considered to be two prominent general theories of crime, there are few research initiatives currently focusing on online sexual harassment among juvenile populations using the aforementioned theoretical principles. As a result of this theoretical shortcoming, this study will attempt to provide a theoretical rationale for mobile phone induced online sexual harassment among juvenile populations. a. Social Learning Theory The basic premise of the social learning theory is that social behavior is a cognitive process in which personality and environment form a continuous process of reciprocal interaction (Akers & Sellers, 2004). The central premise of this idea suggests that behavior is rationalized, learned, internalized, and performed based on the climate of any given situation. (Burgess and Akers, 1966) initially expanded Sutherland’s (1947) Differential Association theory by adding components of both operant and respondent conditioning, as well as components of rational choice theory. (Akers, 1985) then revised this former theory to conceptualize what is now known as the Social Learning Theory (Vold, Bernard, & Snipes, 2002). While this theory has not yet been used extensively in testing for cybercrime and computer-based deviance, this theory is still highly regarded as being one of criminology’s more prominent theories, and has been used for examining a wide range of traditional crimes including juvenile delinquency. An example of an earlier study that used social learning components to issues of cybercrime is that of (Skinner and Fream, 1999). This study examined computer crimes using social learning theory principles. The two major components used were differential association and definitions. The study determined that hanging out with friends who committed similar crimes was the strongest predictor of computer piracy and computer crime index. Imitation of other sources, family members or friends, also increased the likelihood that an individual will commit similar computer crimes. Despite being an older study, the findings suggested that computer crime is a learned behavior. A more recent study done by

Most Popular Documents for SOCIOLOGY MISC 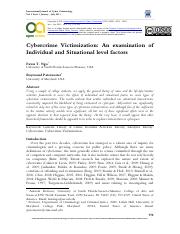 ONLINE PREDATORS AND THEIR VICTIMS misya.pdf 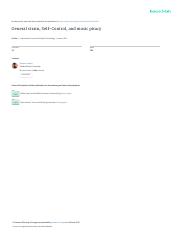 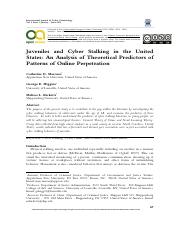 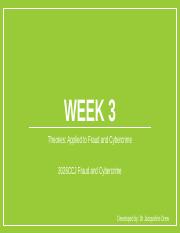 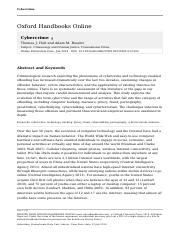