Fulminant type 1 diabetes mellitus associated with a reactivation of Epstein–Barr virus that developed in the course of chemotherapy of multiple myeloma Atsushi Fujiya*, Hiroshi Ochiai, Toshihiro Mizukoshi, Atsushi Kiyota, Taiga Shibata, Atsushi Suzuki, Norimi Ohashi, Hiroshi Sobajima ABSTRACT A 70-year-old woman who was diagnosed with multiple myeloma underwent chemotherapy. Three months after beginning chemotherapy, she was readmitted to the hospital because of fever and hepatopathy. Her elevated Epstein–Barr virus (EBV) antibody levels showed that the hepatopathy was caused by reactivation of EBV. On the 18th hospital day, the levels of fasting plasma glucose (FPG; 451 mg/dL) and pancreatic enzymes were suddenly elevated. Elevation of HbA 1c level (6.4%) was slight, as compared with that of the FPG level. Arterial blood gas analysis showed metabolic acidosis and diabetic ketoacidosis was suspected. The serum C-peptide level was below the detectable limit both before and after glucagon load, thereby suggesting an insulin-dependent state. These features were identical to the features for fulminant type 1 diabetes mellitus. The levels of EBV anti-viral capsid antigen immunoglobulin M decreased, and the clinical course was identical to that associated with reactivation of EBV infection. (J Diabetes Invest, doi: 10.1111/j.2040.1124.2010.00061.x, 2010) KEY WORDS: Fulminant type 1 diabetes mellitus, Epstein–Barr virus, Multiple myeloma INTRODUCTION Type 1 diabetes mellitus is caused by insulin deficiency arising from the destruction of pancreatic b -cells. Type 1 diabetes mell- itus is divided into autoimmune type and idiopathic type. Some patients with idiopathic type 1 diabetes rapidly develop ketoaci- dosis. This type of disease is know as ‘fulminant type 1 diabetes mellitus’ 1,2 , and it accounts for approximately 20% of the keto- sis- or ketoacidosis-onset type 1 diabetes cases 3 . The relationship between the onset of type 1 diabetes and viral infection have been drawing close attention for several years. Viral antibody titers have also been measured in many cases. In this regard, the roles of viruses, such as inﬂuenza B 3 , Coxsackie-A2, Coxsackie-B4 4 , herpes simplex virus-1 (HSV-1), human herpes virus-6 (HHV-6), mumps virus 5 and so on have been studied 6 . We recently encountered a case of fulminant type 1 diabetes in which the onset of disease seemed to have been triggered by reactivation of Epstein–Barr virus (EBV). To date, no case of fulminant type 1 diabetes caused by EBV infection has been reported. Therefore, we have presented this valuable case along with a review of the literature. CASE REPORT The patient was a 70-year-old Japanese woman who was diag- nosed with multiple myeloma in 2006. She also underwent three courses of vincristine, doxorubicin and dexamethasone therapy, and one course of melphalan and prednisolone therapy. The patient’s condition stabilized and she was discharged. However, 7 days after discharge, she visited the hospital again with a high fever (38.6 ° C). Table 1 shows peripheral blood analysis and bio- chemical tests. Although no sign of biliary tract dilatation was

Most Popular Documents for PSY AP807 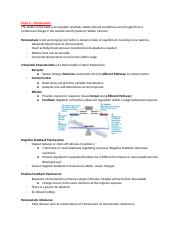 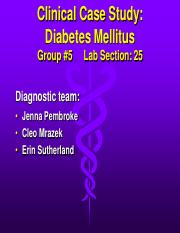 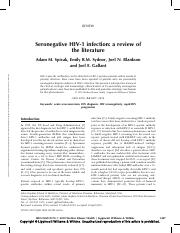 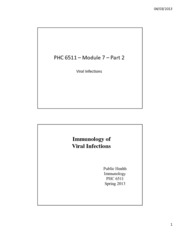 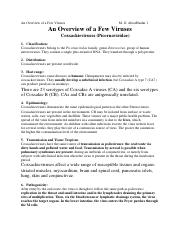 An Overview of a Few Viruses.pdf