Effect and Application of Laws.docx - Effect and...

Effect and Application of Laws (Arts. 1-18, New Civil Code) Cases: Articles 1-10 1. Tanada v. Tuvera, G.R. No. L-63915, 29 December 1986, 146 SCRA 446 EN BANC [G.R. No. L-63915. December 29, 1986.] LORENZO M. TAÑADA, ABRAHAM F. SARMIENTO, and MOVEMENT OF ATTORNEYS FOR BROTHERHOOD, INTEGRITY AND NATIONALISM, INC. (MABINI), Petitioners , v. HON. JUAN C. TUVERA. in his capacity as Executive Assistant to the President, HON. JOAQUIN VENUS, in his capacity as Deputy Executive Assistant to the President, MELQUIADES P. DE LA CRUZ, ETC., ET AL., Respondents . SYLLABUS FERNAN, J. , concurring: chanrob1es virtual 1aw library 1. CIVIL LAW; EFFECT AND APPLICATION OF LAWS; ARTICLE 2, CIVIL CODE; PUBLICATION OF LAWS MADE TO ENSURE CONSTITUTIONAL RIGHT TO DUE PROCESS AND TO INFORMATION. — The categorical statement by this Court on the need for publication before any law be made effective seeks to prevent abuses on the part if the lawmakers and, at the time, ensure to the people their constitutional right to due process and to information on matter of public concern. chanroblesvirtuallawlibrary:red R E S O L U T I O N CRUZ, J. : Due process was invoked by the petitioners in demanding the disclosure or a number of presidential decrees which they claimed had not been published as required by law. The government argued that while publication was necessary as a rule, it was not so when it was "otherwise provided," as when the decrees themselves declared that they were to become effective immediately upon their approval. In the decision of this case on April 24, 1985, the Court affirmed the necessity for the publication of some of these decrees, declaring in the dispositive portion as follows: jgc:chanrobles.com.ph "WHEREFORE, the Court hereby orders respondents to publish to the Official Gazette all unpublished presidential issuances which are of general application, and unless so published, they shall have no binding force and effect." cralaw virtua1aw library The petitioners are now before us again, this time to move for reconsideration/clarification of that decision. 1 Specifically, they ask the following questions: chanrob1es virtual 1aw library 1. What is meant by "law of public nature" or "general applicability" ? 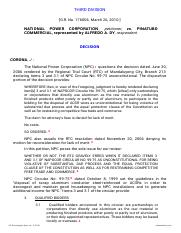 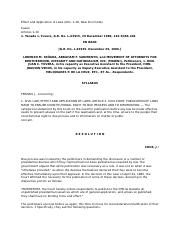 2Effect and Application of Laws.docx 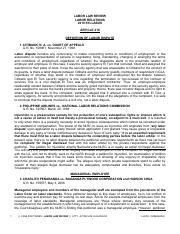 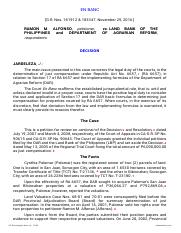 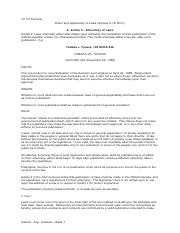 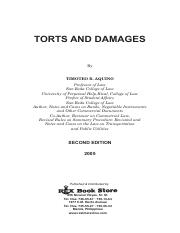