Course: POL343Y1 I nstructor : Vera Achvarina The Efficacy of Economic Sanctions Introduction: In 1919, US President Woodrow Wilson declared that, relative to force, economic sanctions served as a more peaceful way to resolve state conflicts. 1 Although the use of economic sanctions has become commonplace in international relations, particularly after the Cold War, the question of their effectiveness remains a highly divisive issue. 2 Successful cases like India-Nepal (1988-90) suggest that economic sanctions can serve as the alternative to war envisioned by Wilson. In response to Nepal’s military purchases from China, India imposed economic sanctions in the spring of 1989. India cancelled millions of dollars in promised trade credits; while also barring the shipment of goods like salt, fuel, and medicine. The ensuing domestic political pressure and economic turmoil led King Birendra and the Nepalese monarchy to relent to Indian demands by 1990. 3 In contrast, failed cases like Iraq-Kuwait (1990) suggest that economic sanctions serve as ineffective coercive tools. On August 6 th 1990, the United Nations began imposing sanctions on Iraq, in response to their illegal invasion and occupation of Kuwait. The UN barred import and exports of commodities, while also prohibiting the transfer of funds (for non-humanitarian purposes) to either state. However, these sanctions failed to induce Iraq to leave Kuwait, and a collation of US-led military forces was deployed to expel Iraqi forces. 4 1 “A Nation that is boycotted is a nation that is in sight of surrender. Apply this economic, peaceful, silent, deadly remedy and there will be no need for force.” Saul Padover, Wilson’s Ideals , 1st ed. (Washington D.C.: American Council on Public Affairs, 1942), 108. 2 In fact, according to the Institute for International Economics in the 1990s, the estimated use of sanctions increased by 22 percent from the previous decade. Daniel W. Drezner, “The Hidden Hand of Economic Coercion,” International Organization 57, no. 03 (July 24, 2003), . 3 Jean‐Marc F. Blanchard and Norrin M. Ripsman, “Asking The Right Question: When Do Economic Sanctions Work Best?,” Security Studies 9, no. 1–2 (September 1999): 244–7, . 4 C de Jonge Oudraat, “Making Economic Sanctions Work,” Survival 42, no. 3 (September 1, 2000): 105–6, . 1

In these cases, the same tool (economic sanctions) applied in differing settings, yielded different results. Thus, it seems some conditions are more appropriate for applying economic sanctions than others apply. In considering these observations one must ask: Under what circumstances are economic sanctions effective (i.e. able to correct or stop the unfavorable actions of actors) ? The following paper shall explore this question by explicating the prevailing literature on the subject, in addition to using an in-depth case study deduce when economic sanctions work best. Economic sanctions shall be defined as the

Most Popular Documents for POL 343Y1 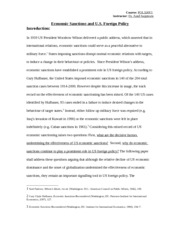 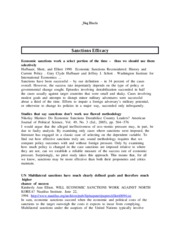 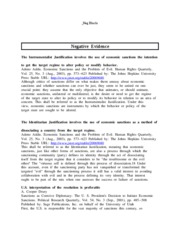 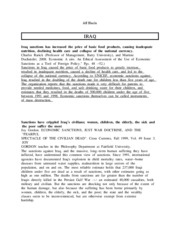