They had no children and at the same time that bett

published the cookbook that had occupied her for several years. They had no children. And at the same time that Bett was telling people how she had found her role in life becoming a carpenter’s helper, and how it had brought her and Rich much closer than before, Rich was falling in love with Nita. She worked in the Registrar’s Office of the university where he taught Medieval Literature. The first time they had made love was amid the shavings and sawn wood of what would become the central room with its arched ceiling. Nita left her sunglasses behind—not on purpose, though Bett who never left anything behind could not believe that. The usual ruckus followed, trite and painful, and ended with Bett going off to California, then Arizona, Nita quitting her job at the suggestion of the registrar, and Rich missing out on becoming dean of arts. He took early retirement, sold the city house. Nita did not inherit the smaller carpenter’s apron but read her books cheerfully in the midst of disorder, made rudimentary dinners on a hot plate, went for long exploratory walks and came back with ragged bouquets of tiger lilies and wild carrot, which she stuffed into empty paint cans. Later, when she and Rich had settled down, she became somewhat embarrassed to think how readily she had played the younger woman, the happy home wrecker, the lissome, laughing, tripping ingenue. She was really a rather serious, physically awkward, self-conscious woman—hardly a girl— who could recite all the queens, not just the kings but the queens, of England, and knew the Thirty Years’ War backwards, but was shy about dancing in front of people and was never going to learn, as Bett had, to get up on a stepladder. Their house has a row of cedars on one side, and a railway embankment on the other. The railway traffic has never amounted to much, and by now there might be only a couple of trains a month. Weeds were lavish between the tracks. One time, when she was on the verge of menopause, Nita had teased Rich into making love up there—not on the ties of course but on the narrow grass verge beside them, and they had climbed down inordinately pleased with themselves.

She thought carefully, every morning when she first took her seat, of the places where Rich was not. He was not in the smaller bathroom where his shaving things still were, and the prescription pills for various troublesome but not serious ailments that he refused to throw out. Nor was he in the bedroom which she had just tidied and left. Not in the larger bathroom which he had entered only to take tub baths. Or in the kitchen that had become mostly his domain in the last year. He was of course not out on the half-scraped deck, ready to peer jokingly in the window—through which she might, in earlier days, have pretended to be starting a striptease. 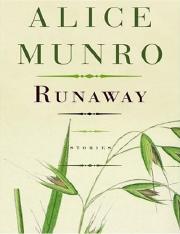 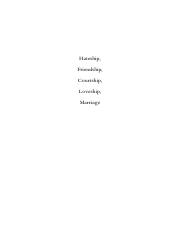 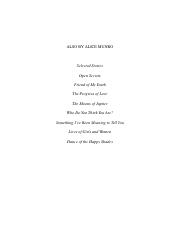 Alice Munro - The Love of a Good Woman 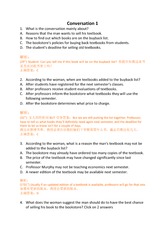