A future research suggestion that has been

A future research suggestion that has been highlighted by Mueller and Lee (2002:237) is that supervisor-subordinate relationships are not always marked by smooth continuity. Instead, these relationships are exposed to the everyday “ups and downs” and stressful situations associated with everyday interaction in a work environment (Mueller & Lee, 2002:237). These could then have an impact on communication and interaction, which could fluctuate over time. The suggestion is that future research, apart from being broadened in scope and undertaken in a different environment, should, in accordance with the suggestions of Mueller and Lee (2002:237), ideally be longitudinal in order to “delineate everyday routine and/or non-routine communication behaviors in differing LMXs that affect communication”. 17

Communicare 24(1) - July 2005 The majority of the above suggestions for further research obviously have a bearing on subordinates and supervisors alike within organisational dyads in the South African organisational environment. 11. CONCLUSION This study, which was partially based on the Yrle et al. (2002) research, has suggested that there could be potential correlations between communication and LMX. The findings have confirmed that there is a positive relationship between subordinates’ evaluation of LMX and their perceptions of the quality of the communication they receive from their supervisors. Further significant results, notably within the South African organisational landscape, have indicated that the population group does not play a significant role in LMX; however, some evidence, which seems to suggest that it does have an impact on communication style, was uncovered. A low correlation was furthermore noted in assessments of LMX by supervisors and subordinates, with no significant differences in perceptions of LMX and communication style as far as diverse population group supervisor-subordinate pairs vs. non-diverse population group supervisor-subordinate pairs were concerned. It was noted that gender played a role in both LMX and communication style within the dyads. Accompanying these findings is the primary suggestion that this study and its hypotheses be subjected to further research within a larger, more diverse organisation, by making use of a larger sample. Additional salient suggestions, mentioned earlier, should also be taken into account when further research is conducted. References ALLINSON, C.W., ARMSTRONG, S.J. & HAYES, J. 2001. The effects of cognitive style on leader-member exchange: A study of manager-subordinate dyads. Journal of Occupational and Organizational Psychology, 74(2):201. [Web:] [Date of access: 26 Nov. 2004] ASHKANASY, N.M. & O’CONNOR, C. 1997. Value congruence in Leader-Member Exchange. The Journal of Social Psychology, 137(5):647-662. CLAMPITT, P.G. & DOWNS, C.W. 1993. Employee perceptions of the relationship between communication and productivity. The Journal of Business Communication, 30(1):5-28. COOPER, D.R. & SCHINDLER, P.S. 1998. Business research methods. New York : McGraw Hill. DAY, D.V. & CRAIN, E.C. 1992. The role of affect and ability in initial exchange quality. Group and Organization Management, 17(4):380. [Web:] [Date of access: 26 Nov. 2004] 18 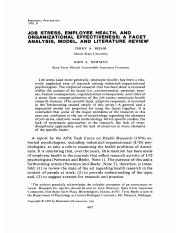 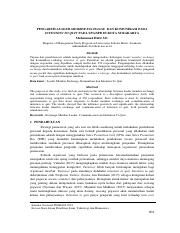 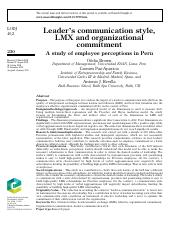 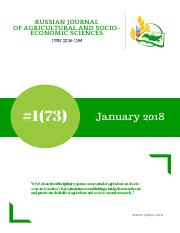 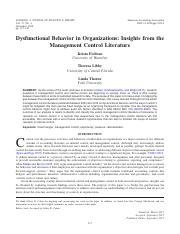 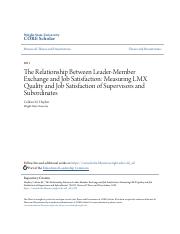 The Relationship Between Leader-Member Exchange and Job Satisfact.pdf