181 b nutrition and immunity from day to day the

18.1 B Nutrition and Immunity • From day to day, the immune system requires adequate amounts of protein, fat, carbohydrate, vitamins, and minerals to maintain its tissues and mount a response. Immune cells in tissues, lymph, and blood constantly survey their surroundings to detect foreign invaders and destroy those invaders before any symptoms of illness set in. • If some of these foreign invaders escape destruction, then the immune system initiates a response. The immune response demands greater amounts of nutrients for the synthesis of antibodies and cytokines, for cell multiplication, for free radical generation, and for the active process of ending the response. • Nutrients and their role in immunity: • Protein- Maintains healthy skin and other epithelial tissues (barriers to infection); participates in the synthesis and function of the organs and cells of the immune system and antibody production • Omega 3 Fatty Acids- Help to resolve inflammation when it is no longer needed for the immune response through production of lipid mediators known as resolvins and protectins, which also play a role in enhancing host defense • Vitamin A- Maintains healthy skin and other epithelial tissues (barriers to infection); participates in the cell replication and specialization that supports immune-cell and antibody production and the anti-inflammatory response • Vitamin D- Regulates immune cell (T-cell) responses; participates in antibody production • Vitamin C & E- Protect against oxidative damage • Vitamin B6 - Helps maintain an effective immune response; participates in antibody production • Vitamin B12 & Folate- Assist in cell replication and specialization that support immune cell and antibody production • Selenium- Protects against oxidative damage • Zinc - Helps maintain an effective immune response; participates in antibody production • Thus disease and malnutrition create a synergistic downward spiral that must be broken for recovery to occur. • Synergistic- multiple factors operating together in such a way that their combined effects are greater than the sum of their individual effects. • Quite simply, optimal immunity depends on optimal nutrition—enough, but not too much, of each of the nutrients. People with weakened immune systems, such as the elderly, benefit from a nutritious diet and supplements of selected nutrients. 18.1C HIV & AIDS • Perhaps the most well-known infectious disease today is AIDS (acquired immune deficiency syndrome) . AIDS develops from infection by HIV (human immunodeficiency virus) , which is transmitted by direct contact with contaminated body fluids, including semen, vaginal secretions, and blood (but not saliva), or by passage of the infection from a mother to her infant during pregnancy, birth, or breastfeeding. HIV attacks the immune system and disables the body’s defenses against other diseases. Then these diseases, which would produce only mild, if any, illness in people with healthy immune systems, destroy health and life.

Most Popular Documents for FON 241 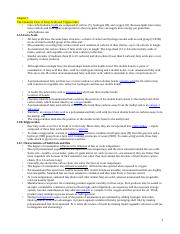 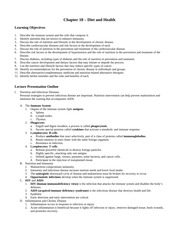 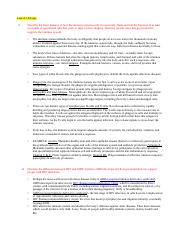 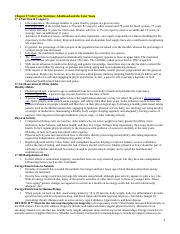 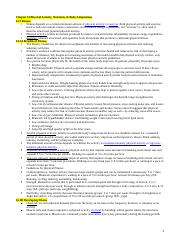 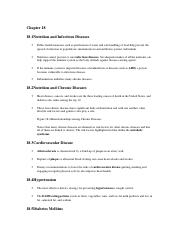